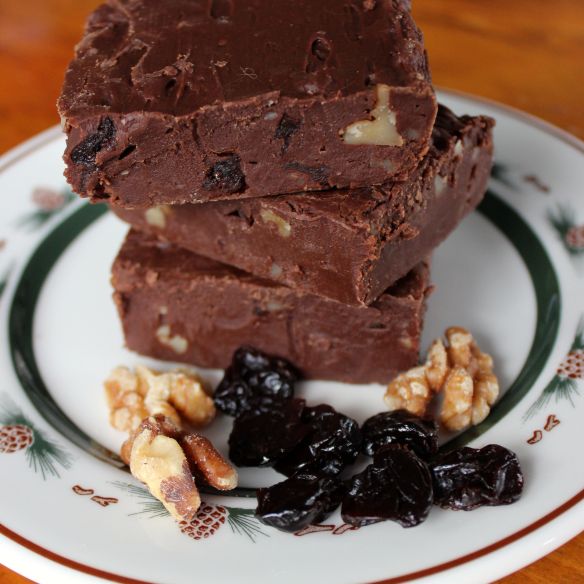 What would Christmas be without fudge? Dick, without Jane. Tarzan, without Jane (was it the same Jane, do you think?) Santa, without Rudolph. Eggnog, without rum.

It would be sad, that’s what it would be!

While I’m away, selling candy to the huddled masses of Westchester County, New York, I thought I’d empower you to make your own holiday fudge. I could sell it to you but you’re a crafty, self-sufficient, DIY bunch and this fudge is really easy. If you do a good job with this, someday I’ll teach you to temper chocolate and you won’t need me at all!

And the recipe makes five pounds of fudge! You know you’d never buy that much candy but, hey, if the recipe provides that much, who are you to argue?

I’m giving you a basic recipe, published several years ago in the Buffalo News. I always, always, add dried sour cherries from Michigan because they counteract the sometimes-overwhelming sweetness of fudge.

I almost always add walnuts, too, because my husband loves them and it’s easier to put them in than to listen to him miss them, in that sad little voice of his.

You can add what you like—toasted pecans, raisins, craisins, toasted coconut, crispy bacon. All of the above. Or even none of the above, for purists.

This makes a pretty, always welcome, stocking stuffer, cut in 2- or 3-inch squares and tucked in a cellophane bag with a pretty ribbon. You can also add it to that plate of cookies you give all your friends and co-workers. Or you can keep it for yourself and start a diet with me on January 2!

* ½ cup butter or margarine
* 1 can (about 14-ounce) evaporated milk (NOT sweetened condensed milk)
* 4 1/2 cups sugar
* 8 ounces marshmallows; I use mini-marshmallows
* 2 ounces unsweetened chocolate (all of these chocolates can be found in the baking aisle; they’re often sold under the name “Baker’s”)
* 12 ounces semisweet chocolate
* 8 ounces sweet baking chocolate
* 1 Tablespoon vanilla
*1 cup roughly chopped walnuts
* 1 cup roughly chopped dried sour cherries
(or about 2 cups of whatever add-ins sound good to you)

Combine butter, milk, and sugar in a large saucepan. Stir over medium heat until sugar dissolves. Bring to a boil and cover. Turn down a little and boil for 5 minutes.

Remove from heat. Add marshmallows; stir until melted. Add the three kinds of chocolate, one at a time, stirring until melted. Blend in vanilla and whatever you’re adding.

Pour into foil-lined 10-by-15-inch pan. The 10-by-15-inch pan is often called a jelly roll pan. You could use any similarly sized pan but I wouldn’t go smaller or the fudge will be very thick. Not that there’s anything wrong with that.

Let fudge stand until firm. When the fudge has set, put a cutting board on top and carefully flip it over so that the fudge leaves the pan. Peel the foil off and cut as desired.

Fudge will dry out pretty quickly if left in the air. Wrap it in plastic and store in a plastic container for a few days or wrap tightly and freeze. Fudge freezes quite well!