I think a country auction is just about a perfect way to spend a few hours. Why?

I love the drama and thrill that comes from winning a bid.

I love a bargain.

I’m not sure there’s anywhere else these elements come together and yet, in 3 years of living in this rural area, I’ve been to exactly one auction.

So, this, too, has been on the list of things I’ve Been Meaning To Do (IBMTD). We went to an auction recently and had a great time on all counts!

The auction was all about vintage and antique items. This particular auction house seems to pride itself on offering good quality and the auctioneers are very knowledgeable. They did sell some big lots of books and fabrics for very low prices but most of the auction focused on better-quality items. 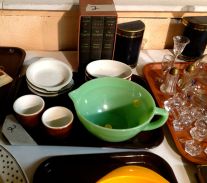 The items offered had a very rustic and unusual flair. From the stuffed raccoon, in perfect condition, to the Adirondack-style occasional tables (which belong to me now!), this auction felt like it represented a very specific part of the world. This wonderful handmade leather pillow could only have come from one tiny town in the foothills of the Adirondack mountains.

This particular auction also had some linens for sale. It was a mixed lot of Madeira linens, heavy on hand-embroidered cocktail mats and napkins, with a couple of very nice tablecloths, as well. You know I intended to win the bid for these! 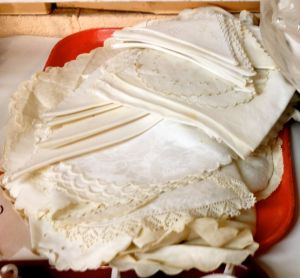 I had already won the bid for the tables and my pulse had remained steady but, when the linens were offered, my heart raced and my pulse quickened. I opened the bidding and hoped no one else would care about these old pieces of fabric.

My hands were shaking a little! You don’t get that feeling on eBay, my friends, and certainly not from meandering around a thrift shop.

Did I get a bargain? Not on the linens, in particular. It was a good price but not a great bargain. But there were other bargains galore at this auction. Good vintage furniture was going for incredibly low prices—it made me wish I had a much bigger house, so I could bring it all home!

And it has to be said that the buying and selling are only part of the fun at these auctions. The people-watching is superb, with all types represented, from auctioneers to buyers.

Auctioneers are often real characters, so skilled at working their audience. Years ago, I saw an auctioneer trying to sell a box lot of odds and ends. The box was just a mishmash of kitchen tools—not worth much. The auctioneer tried to start the bidding at two dollars. No takers. One dollar? Silence. The bid went down. Would anyone start the bidding at a quarter? No? No?

In his frustration, the auctioneer reached into his pocket and took out a dollar bill. He threw it into the box, with the junk, and hollered, “Now can I get a 50-cent bid?” The audience laughed hard and the bidding commenced.

The auctioneers we saw last week are brothers. Both have the kind of patter we associate with old-time auctioneers and a great sense of humor. They watch the crowd like hawks and play with bidders, to get that bid going. They keep things moving, to let bidders know that you have to be in it to win it—she who hesitates loses!

In the crowd that day were the laconic-style bidders who barely moved when they made their bids. These folks clearly go to every auction and seem to keep their bidding number from one auction to the next. We also saw the young, eager couple, excitedly waving their bidding card and piling up items for their home. The people behind us nearly squealed with delight when they won the beautiful banjo.

People came and went. They drank coffee and ate doughnuts and Michigans. They tried not to show interest in the items they really wanted. They bought things they didn’t really want just because the prices were so good.

It was a fun day for all and a perfect way to spend a cold and snowy winter day. Snug inside a big old auction house, warmed by the excitement of the undertaking, with treasures to be carted home at the end of the day.

I’ll be meaning to go back!