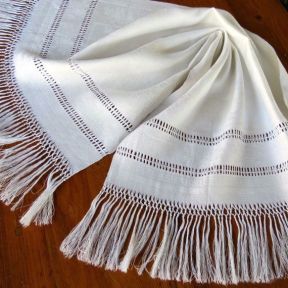 Have you ever seen a gorgeous handmade item and, because you couldn’t afford it, tried to make it yourself? Of course you have! Isn’t that what all the do-it-yourself boards on Pinterest encourage us to do?

This impulse isn’t new. People seem always to have wanted to possess beauty beyond their means to afford. Evidence of this came home to me in a poignant pairing of vintage linens recently.

One huge category of vintage linens is towels—kitchen towels, dish towels, tea towels, bath towels; mostly these towels were meant to be used and used hard.

But another whole category of towels exists in what is often called “show” or “display” towels. Display towels weren’t meant to be used—they were designed to show off. These towels were usually made of highest-quality linen, often in damask. Damask linen is often very fine linen with a subtle white-on-white (or any other single color) design that is created by weaving. 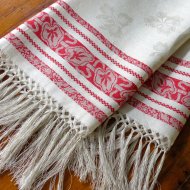 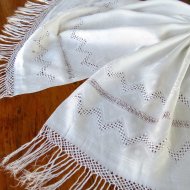 Understated and elegant damask combined with long, gorgeous (and impractical) fringe and with some sort of hand-worked embellishment combine to make a towel that should not be touched but simply displayed to communicate about refinement and good taste.

The hand craftsmanship in these expensive display towels was superior. The long fringe was hand braided and knotted to perfection. When other embellishment, such as drawn thread work was used, the threads seem to magically twist and turn, without any evidence of a human hand at work.

But what if you couldn’t afford that lush fabric? What if you didn’t have access to the beauty and craftsmanship of these stunning items but still understood the impulse to make a statement about your love of pretty things?

What if you were striving to move up, to transcend your roots, to show you understood beauty and refinement and taste, even if you couldn’t really afford to indulge in items that would demonstrate your understanding? What if you wanted a pretty show towel but couldn’t afford one?

In my imagination, that’s what happened here. 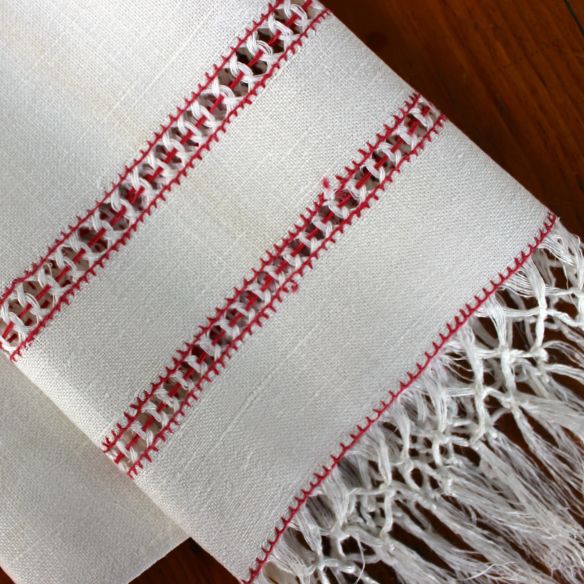 This towel mimics the key elements of the expensive, high-quality towels.

It’s made of linen but, instead of very fine damask, this one is made of plain weave, possibly homespun, linen. It hasn’t been bleached pure white and slubs are apparent.

High-quality display towels have the damask tone-on-tone weave to add interest. Because this towel is not made of damask, the maker added color with red stitching. The stitching is the most apparent sign that this is handmade by an inexpert hand.

The maker used a lot of blanket stitch to finish edges and you can easily see how uneven the stitches are. The maker seems to have been counting threads to determine where to place stitches but, because the weave is uneven, the stitches look uneven. Also, the person who stitched this had trouble deciding what to do when she came to the end of a thread. Knots are all too noticeable. 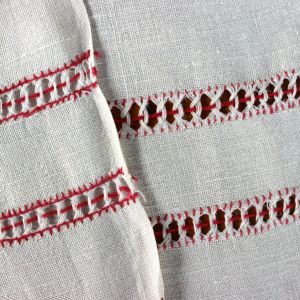 High-quality towels have long, hand-braided fringe. This one does, too. The braiding is less meticulous and the fringe is shorter. (The fact that it looks meager is due to the fact that this towel was used and laundered. The fringe tangled and broke when it was combed out.)

Both towels incorporate the same drawn thread work to create open bands across the width of the towel. This is created by horizontal threads being cut and pulled from the weave. The vertical threads are then twisted and held by the introduction of a new horizontal thread.  The use of red thread in the homemade towel highlights the twisting white threads but also draws attention to unevenness in the design. 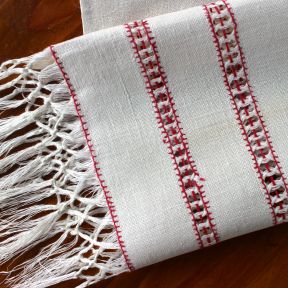 Both of these are handmade; one is obviously homemade.

Which one is better? Which is more treasured?

I have to admit, I admire the expensive fine towels—they draw me because they are simply so gorgeous. Lush, high-class, expensive, understated, yet elegant.

It’s homey, far from perfect, a little awkward, and out of place in a world that values beauty and money and perfection. But authentic.

It makes me a little sad to think that, of the two, the world will value the pretty and perfect towel.

My little handmade towel is like a homely, mixed breed puppy, likely to be overlooked as unlovely, especially when compared directly with a haughty, perfectly groomed purebred.

But I’ve always been a sucker for a stray. I’ll appreciate the beauty of the perfect towels, and then pass them on to others.

And I’ll keep the other towel, and display it, to serve as a tangible reminder of who I really am.

Just like the towel, I’m homey, far from perfect, a little awkward, and out of place in a world that values beauty and money and perfection. But authentic.

48 thoughts on “A Tale of Two Towels”