Welcome to the third installment of American Dishtowel Club (ADC) show! With your input we’ve sought to apply conformation standards to three groups of towels, ultimately to arrive at the Best of Show in the competitive world of dishtowels. (If you have not yet reviewed and voted on the Working Group Towels and the Sporting Group Towels, you are encouraged to do so soon—voting is very tight!)

Today we are joined by the towels of the Non-Working, Non-Sporting group. Upon reviewing these groups, we hope you will vote, in the comments, for your favorite.

Guidelines: These towels are bred primarily to reflect on their owners’ affluence and exquisite taste. These towels demonstrate a phenomenal gift of beauty and reflect common ancestral traits of high, pure breeding and quality. It should be noted that these towels require special grooming and can be haughty and difficult to care for. Their sheer physical beauty captivates many in spite of the fact that these towels rarely perform well in a working or sporting environment.

Steadfastly devoted to loved ones, but standoffish and lordly toward strangers

Monogrammed Damask Towels are often considered one-owner towels; they are loyal and bonded to their owners. Of substantial size and impressive good looks, these towels most often bear a pure-white coat and are marked by one or more hand-wrought embroidered initials. Towels of this class can be viewed by outsiders as cold and remote but they are affectionate at home and beloved by their families. 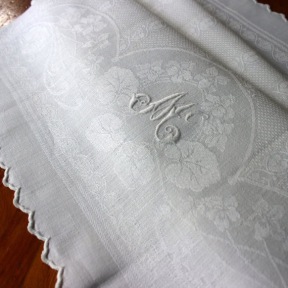 Dainty Fingertip Towels are the teacup poodles of the towel world and, in fact, discussions are underway regarding the creation of a new “toy” towel category in years to come. These towels are bred for petite size and sweet prettiness. They can be vulnerable to injuries from hard exercise and are perhaps best suited to households without children. Eager to please, they are boon companions of the elderly and love to be pampered.

If ever a towel was designed for the show ring, the Fringed Display Towel fits the bill. Physically commanding and of large build, these towels are arresting in appearance. They are prized for their genetic make-up—only the highest quality linen is found in these towels. The towels are expensive to own and maintain, and owners are proud to display these towels for others to envy and admire. The towels are haughty and can appear untouchable; however, anyone who appreciates sheer physical perfection and breeding will be entranced. 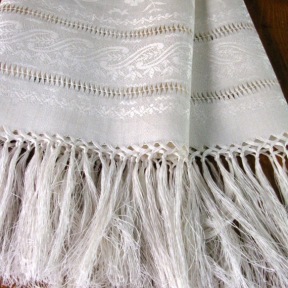 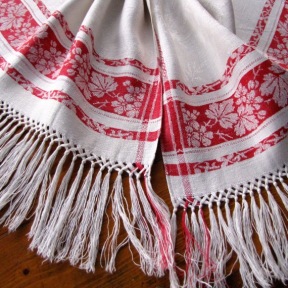 Now that you have familiarized yourself with the towels in the Non-Working/Non-Sporting Group, we invite you to vote for your favorite; as you vote, please keep in mind that you are voting not for a specific towel but the category as a whole.

We hope you’ll join us next week for the final installment in the American Dishtowel Club Conformation Show. At that meeting, the Best of Breed for each of the three classes will be revealed and you will have the opportunity to vote for Best of Show.