Welcome back to the American Dishtowel Club (ADC) show and the much-anticipated final selection of Best of Show!

With your thoughtful and generous input we’ve applied conformation standards to three groups of dishtowels.

The voting was very tight, reflecting the high-caliber of entrants in the show, as well as discernment of the voting public.

Nonetheless, the people have spoken and we have arrived at the three finalists for Best of Show in the competitive world of dishtowels. These are: the Flour Sack Towel, the 1950s Towel, and the Fringed Display Towel.

Please review the finalists carefully and vote, in the comments section, for your choice of “best of show” dishtowel!

Guidelines: The flour or feed sack towel is designed as a towel to do a specific job—drying dishes. Despite its humble origins and surface appearance of fragility, these towels are perfect for their job. They display great thirst, are long-lived, and, as one would expect of a water towel, they dry quickly. There are few absolute characteristics to be applied to this group, although they are often so beloved by their families that they are decorated lavishly.

Guidelines: It is common for dishtowels to reflect societal preferences and trends. This can be seen nowhere more clearly than in the 1950s-era towel. Towels of this breed are resolutely upbeat and sociable. Members of the group often have a pink and aqua coloration, although they may display other bright tones, and stylized graphics. Potential owners should know that towels of this group are enthusiastic to a fault; they will not behave in a subtle manner or remain quiet, no matter how well trained. 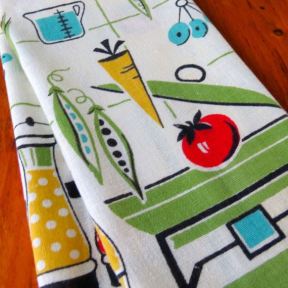 Guidelines: If ever a towel was designed for the show ring, the Fringed Display Towel fits the bill. Physically commanding and of large build, these towels are arresting in appearance. They are prized for their genetic make-up—only the highest quality linen is found in these towels. The towels are expensive to own and maintain, and owners are proud to display these towels for others to envy and admire. The towels are haughty and can appear untouchable; however, anyone who appreciates sheer physical perfection and breeding will be entranced.

Stags in natural and red

Now that you have reviewed the best of breed finalists, we encourage you to vote for your favorite; as you vote, please keep in mind that you are voting not for a specific towel but the category of dishtowel you feel exemplifies best of show. Voting is open for one week. Results will be announced at the end of voting. Don’t delay in making your voice heard!