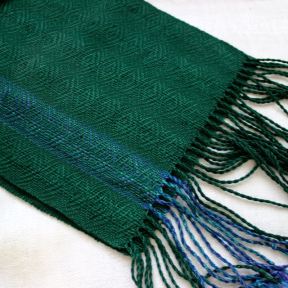 Have you ever wanted something really bad and then, when you got it, all you could do was just sit there and grin?

This project has been on my loom, mocking me, since BGG (before Gigi). That’s six long months.

It was begun in summer, languished through a glorious autumn, waited patiently as winter approached and a New Year arrived.

And, finally, the project is finished.

Why do some projects stall?

The obvious reason here was the addition of the small furry whirling dervish and her big brother.

But I can’t blame it all on them.

Mostly it was that the work wasn’t meeting my expectations.

Projects like this one make me keenly aware of how little I know. And I hate not knowing. With weaving, I find it so difficult to predict how colors will interact, how the weft threads will subdue or enhance the warp.

In this case, the warp was gorgeous and nothing I put in as weft maintained that glow.

The pattern didn’t work out as I thought it would. It’s an undulating twill and the weaving kept shifting and gapping. “Ugly” is the word that comes to mind.

To solve this, I had to take a new approach that involved using two shuttles, something I hadn’t done before and found very difficult to get comfortable with.

My loom had to be moved to a room with a door (Gigi, I’m looking at you) and I don’t like being shut away while I’m weaving, I guess.

Progress was slow and sporadic. I often filled my time doing anything but weaving. I gravitated toward projects that felt more fulfilling and fun. It was hard for me to stay motivated when, with every throw of the shuttle, I felt disappointed and fairly incompetent.

But now the scarves are finished and I’m thrilled to be done! They turned out better than I thought they would—fine, really. I like the one with the light weft color but I don’t love it. The darker one pleases me more. The intense color I liked so much in the warp is subtle, but the ghost of it is there.

I can also, now, be glad for all the project taught me. I hope I won’t make some of those mistakes again.

Mostly I’m thrilled to be done because now I can move on. I already have a new project under way—kitchen towels!

I am going to leave the pesky scarves out, in plain sight, for a while though. I want to grin at them. 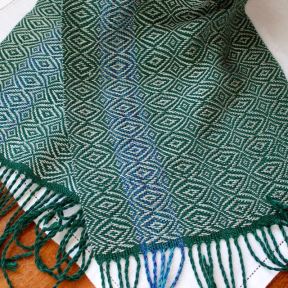 76 thoughts on “Finally, A Finish”