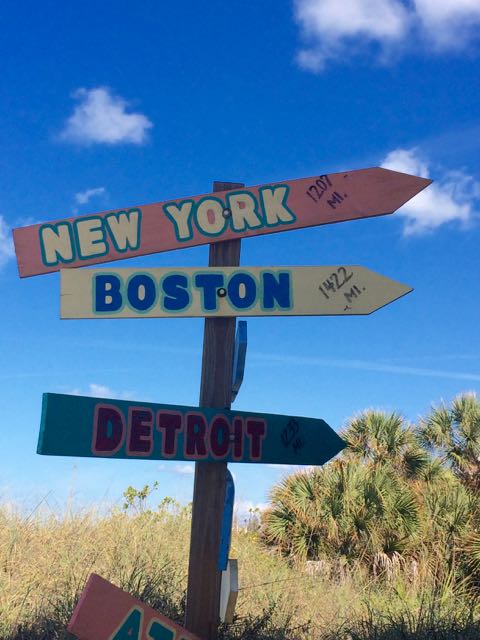 Not the chilly, grayish blue of upstate New York but the happy, warm Florida blues!

Can you guess which blue is my favorite blue? 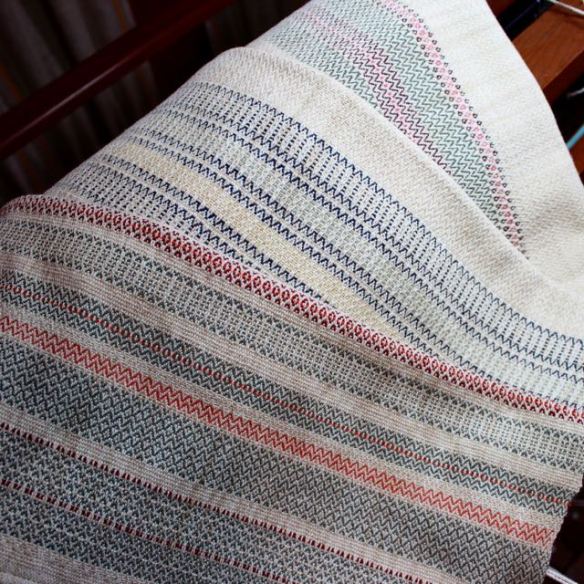 After taking about six months to finish my last weaving project, the two scarves that survived the new kitten and that also survived my indecision and general antipathy for the project, I’ve already finished my next weaving project.

From soup to nuts, from winding warp to sewing the hems, this bunch of kitchen towels took me about three weeks. Three weeks would not be a marvel for serious weavers but, for me, it is lightning fast!

What made the difference? Um . . . I think I just know my place. I have admitted what I knew.

I’m a dishtowel kind of gal. Cotton and linen and old-fashioned practicality are my natural habitat as a weaver. 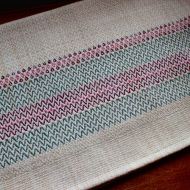 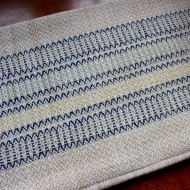 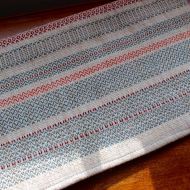 It’s odd, how we play favorites with the things we make, which items resonate for us.

My husband is, without a doubt, a weaver of table runners. He occasionally makes something else but when I ask him what project he has planned next, I can say, sotto voce, “runner” in unison with him stating “runner” out loud. He would no sooner make a scarf . . .

Our weaving teacher, on the other hand, is a scarf gal. She makes other fine handwovens but she always comes back to her happy place, making lush, drapey scarves in striking textures and colors.

This choosing of favorites doesn’t just happen with weaving, I’ve noticed. I don’t always make quilts but, when I do, I choose to make bed-size quilts. I have friends, though, who would never dream of doing so. When they quilt, they are drawn to wall hangings and table runners.

When I worked in metals, I was a bracelet and necklace maker, almost never a brooch or ring girl. My time in the kitchen is spent making sweets—chocolates and baked goods—while my husband finds satisfaction with meals. As a gardener, I’m all about the flowers . . . no veggies for me.

Sometimes I ponder my preferences and try to figure out what makes me tick as a maker. And sometimes, I force myself to make other things, like scarves or table runners or, heaven help us all, dinner.

Other times, I just accept me as I am. After all, the world needs dishtowels and bed coverings and chocolate-covered caramels so I might as well be the one who makes them.

And since I look forward to working in my natural habitat and making things I like to make, I am productive and relaxed in the making.

It should come as no surprise that the new warp on the loom is for kitchen towels that I will make with enthusiasm. The yoyos I make diligently, and with enthusiasm, will eventually become a bedspread. When spring comes, I’ll be greeting my geraniums and hollyhocks with enthusiasm.

How goes it with you and your making? Are you an equal-opportunity creator, who finds your satisfaction in exploring the gamut of possibilities in your chosen medium? Or do you, too, have a natural habitat that you recognize as your crafting home? 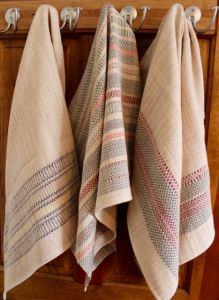 When I wrote about Lois and Eddie, I ended the story in mid-June, 1940, when Lois stopped writing in her diary.

At that moment in time, she was young, in love, optimistic—and that seemed enough for me. She had recently written “Eddie and I have more fun together than a barrel of monkeys. Oh, we love each other so much I just can’t explain.”

I didn’t know if I wanted more information—

What if Eddie jilted her and left her heart broken?

What if Eddie went to World War II and died, or returned a broken man? What if they wanted children and could have none or had one precious child who died?

I thought maybe it was better to leave her happy . . .

But my friend Carol was curious, like many of you, and wanted to know more.

I got a Facebook message yesterday from Carol.* She has been a journalist and is currently a librarian and she brought her considerable research skills to bear on the subject.

And I’m so glad she did!

So, here’s what we learned about the rest of the story.

Lois was only 17 in 1940, when she got engaged. She lived in the tiny town of Mooers, NY, which sits near the Canadian border. Eddie lived about 13 miles east in Rouses Point, a larger town even closer to Canada.

Eddie was salutatorian in high school and worked as a sales rep for different companies; he seems to have specialized in radio. He did join the Navy during World War II.

Eddie and Lois were engaged in 1940 and she left the area with Eddie in 1942. A local newspaper has the story that “a farewell dinner was given, where [Lois] was presented with a practical gift.” They moved to western New York for Eddie’s job.

They were married October 1, 1942, in Williamsville, NY, where Lois’s parents had moved. Lois wore a light blue wool dress with navy accessories and had a corsage of red rosebuds. They went to Niagara Falls for their honeymoon, and then lived in Buffalo.

By the late-1940s, however, Lois and Eddie had moved back to the North Country and were active in the towns where they grew up. Eddie was the service manager of a local company that sold TVs and radios. 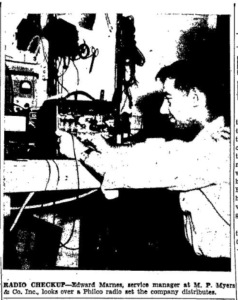 The only photo of either Lois or Eddie that I came across.

Lois seems not to have worked outside the home during these years. She and Eddie had one child, a son, and by 1949 she was actively involved in the local Home Bureau, where she taught others how to sew.

Lois also did charitable work, especially for the Mooers Free Library for many, many years, and for the March of Dimes.

She sounds like a good homemaker, from what I can tell. She certainly did a lot of entertaining, and the local newspapers of the day made note of it all!

In early September 1969, the newspaper also reported that Lois had blue jays in her yard—this was notable, I guess, because it was early for blue jays. The paper reports that Lois, ”being quite sure they were hungry from their journey from who-knows-where, . . . is feeding them.”

Eddie died in 1978, at the age of 59. Almost immediately, Lois became the local representative for Avon, which, Carol says, indicates she was a true survivor! I wonder how many women turned to Avon for income when times got tough and they had few marketable skills.

When Carol wrote to me, with most of these details of Lois’s life, she said, “I think we would’ve liked being friends with her.”

Let’s see—she was a small-town girl, happy with her world. She did good deeds, loved her guy, and took care of animals. She adapted to what life gave her, moved when she needed to and came home when she could. She tirelessly supported her library. She sewed and cooked with loving hands at home.

Yes, I am quite sure I would’ve liked being friends with Lois. I think you would’ve, too.

* I mostly don’t like Facebook but Carol is one reason I keep my account. I knew her 40-plus years ago, in high school. She was a few years younger than I and normally, in the way of high school kids, that would’ve meant she was non-existent to me. But I had reason to spend a few days getting to know her and thought she was the funniest, cleverest person I ever met. I graduated, moved away, and never heard from Carol again, until she popped up on Facebook! And now my life is enriched by the brief interactions I have with her (she is still funny and clever and very supportive) . . . and that makes the rest of Facebook foolishness worthwhile!

I bought an old diary at a garage sale. Three years ago. For 25 cents. 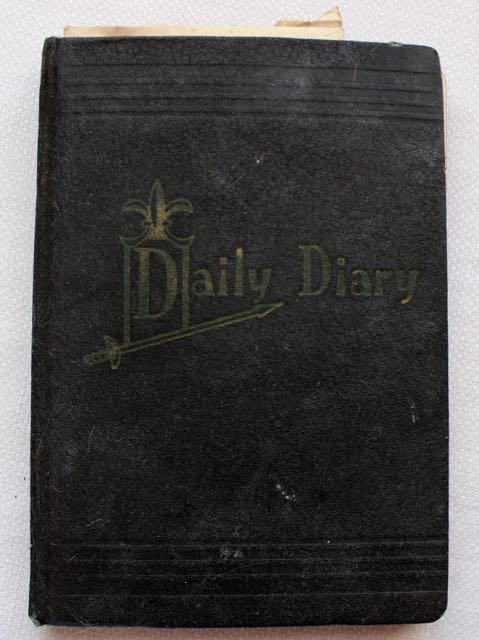 I finally took a good look. 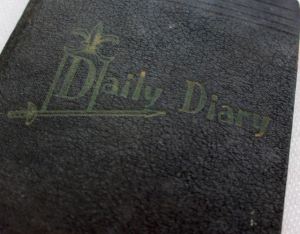 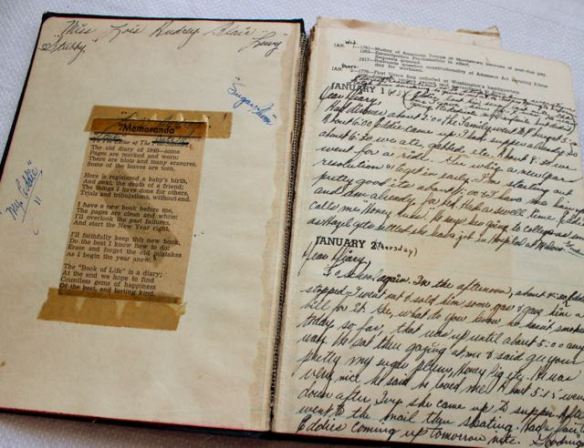 You don’t need me to tell you why. 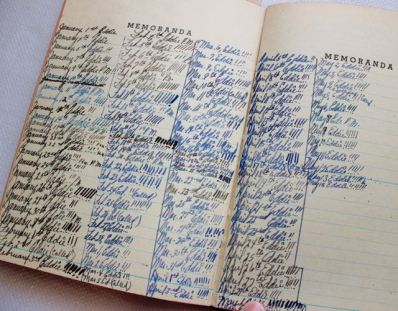 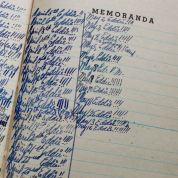 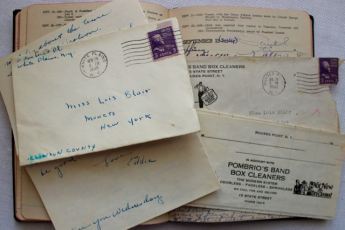 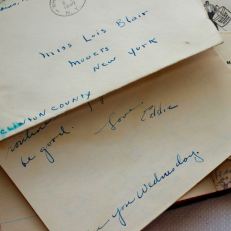 Let’s just assume they lived happily ever after, shall we?