I could tell you about:

A trip to Harvard. I felt smart there.

Matisse in His Studio. The artist and some of the artifacts that inspired him.

I could tell you tons about the Boston Marathon.

Inspiring runners of all different abilities.

Marine who lost a leg in Afghanistan; he carried the flag the whole way

Racers getting help from a friend

Inspiring because they were so fast.

Ultimate men’s winner and 2nd place, neck and neck with 5 miles to go

Inspiring because they kept a sense of humor.

So many costumes and it was VERY warm out!

Can you see? He juggled three balls the whole way!

Inspiring because they were ordinary folk doing something extraordinary–these young women, who we went to watch, were two of 30,000!

And folks who supported every single one.

We watched at Boston College–amazing energy

We ALL wished we had had this idea for watching!

I could go on and on, and tell you about spring coming to the North Country of upstate New York, or the opening of our local ice cream shop, or I could give you updates on weaving, quilting, all kinds of crafting.

But I won’t. I’ll stop being a tease and I’ll tell you what you’ve been waiting to hear, eager to hear . . .

Who wins the hand-woven key fob?!

We had lots of entries, from all over the world, and I do wish I had dozens of key fobs to give away. But I had to use my random number generator to choose one of you.

I love pushing the button on my random number generator—the suspense, the anticipation, the thrill!

My random number generator said I should give the key fob to Judy, at New England Garden and Thread!

But I enjoyed hitting the button and the suspense, the anticipation, the thrill, so much, I hit the button again—what the heck!

And the generator said I should give another key fob to Jean, at One Small Stitch. (This one is sort of daunting—Jean is a weaver of many, MANY years experience! She has been supportive of my learning to weave since even before I took my first workshop.)

So, Judy and Jean, if you will email me at kerrycan2@gmail.com, with your addresses, I’ll send your gift!

And you can choose–either the key fob I originally pictured or this brown and turquoise one I’ve made since. I have two of each. 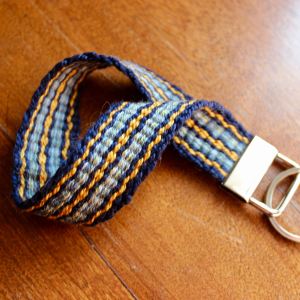 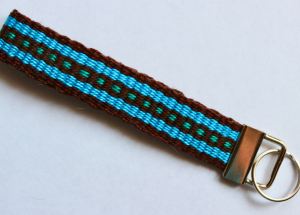 Everyone else, take heart. I like giving stuff away and, before long, I bet my fingers will be itching to hit that button and choose another random number! 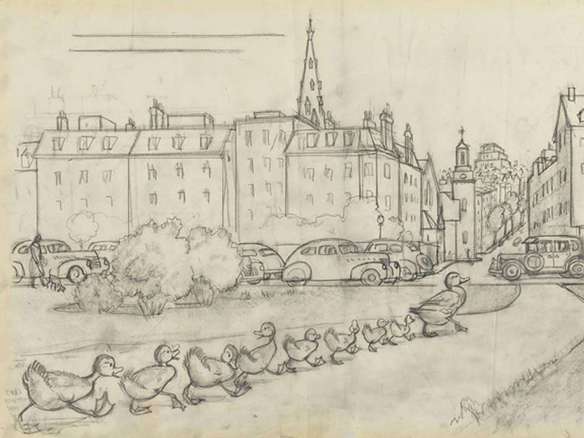 It’s not easy raising children in an urban environment—so many dangers and pitfalls! But with smart parents, careful planning, and the kindness of friends and stranger alike, all can turn out well.

Such is the story told in the children’s book, Make Way for Ducklings. Written in 1941 by Robert McCloskey, the book won the Caldecott Medal for “most distinguished American picture book for children” in 1942.

The story is set in Boston, Massachusetts, and that town has embraced the story and the eight ducklings, named Jack, Kack, Lack, Mack, Nack, Ouack, Pack, and Quack, ever since the book was published.

In the book, Mama Mallard leads her ducklings across some of the busiest streets in the city and their friend, the policeman, stops traffic to allow them to make it safely to the park.

On our recent visit to Boston, we visited the venerable Museum of Fine Arts to see the “Matisse on the Studio” exhibit. While we were there, we found the ducklings honored, too.

A gallery featured McCloskey’s delightful drawings and paintings done for several of his books for children and the ducklings took center stage. 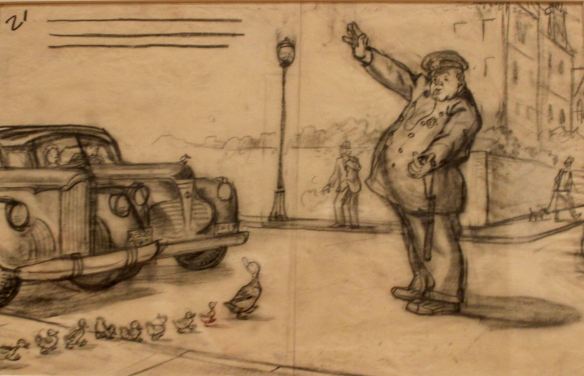 the picture translated to sculpture

Then on a perfect morning walk in the Boston Public Garden, we visited the ducklings themselves, and their proud mama.

Yes, it was Easter, and, yes, those are Easter bonnets.

Mama in her bonnet 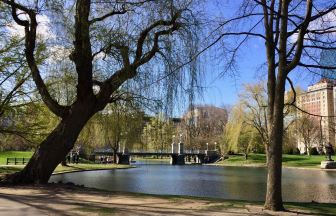 The garden the ducklings call home

All her ducks in a row

Do folks make way for ducklings where you live?

We were small. Winter was long. Summer would fly by.

We had to be ready.

The rituals of spring for my sister and I were often tied up with being ready for what came next. We wanted to rush summer!

As soon as the snow was off our driveway, we would start walking barefoot on the crushed stones, in order to toughen our feet up for going barefoot all summer. A long winter in socks and boots had made our feet soft and we’d lost the calluses. We needed to get ready!

We would wait, in the bedroom at the back of the house. Outside the window there was a thermometer. Our mother, tired of hearing us nag, had told us we could go without jackets when the temperature reached 60. We stared at the mercury, willing it to rise, so we wouldn’t miss a moment.

We spent a good deal of our summer time at the “little beach,” a pond 6 or 7 miles from our house. We knew we needed to be ready for the cold water of early summer so we took cold baths at home to prepare ourselves. We squealed and shivered in the tub, but we knew it would be worth it.

Even on cloudy days of iffy weather, we wanted to go to the little beach. My mother, tired of hearing us nag, would tell us to go away and, if we had 15 minutes of sunshine, she’d take us.

We would sit on a big stone by the road and, when the sun came out, we would start to count—one-thousand, two-thousand–as the seconds and minutes passed and the sun stayed with us. Then, when it deserted, we’d wait for it, and start again. Some days we were lucky and we’d get our 15 minutes of continuous sun and mom would drive up to take us to that little beach.

Now, I don’t know how long it has been since I’ve walked barefoot outside or gone swimming in water so cold.

But, even as adults, winter is still long and summer is short, so we get ready.

A lot of spring activity at my house now involves doing chores–get the deck furniture out, clean the glassed-in porch from a winter of using it as storage space, rake leaves off garden beds. These chores don’t feel so onerous in spring. Even as we shoulder the load, we have that sense of thrill . . . we’re getting ready for the short, intense summer ahead.

And we still rush summer–the first campfire of the season will be lit when it’s still way too chilly outside. The first trip for soft ice cream will be on a day when eating the treat gives me the shivers. We’ll buy annuals long before it’s safe to plant them outside.

We are all big now. But winter is still long. Summer will fly by.

We have to be ready.

While the boy who lives here makes serious, complicated, heirloom pieces, the girl who shares the house (that would be me!) takes a different tack.

This girl just wants to have fun.

And I have been having such fun lately!

I have been weaving, obsessively, on three different looms.

I made scarves for a special blog pal, a real patron of the crafts, but I will wait to tell about those. I will say that it was particular fun, and a little nervous-making, to know for whom I was doing that weaving.

My other projects, though, haven’t been as weighty. I’ve been playing and experimenting and learning as I go. How fun is that?!

I told you a while ago that I got a big new loom with 12 shafts, to allow more complicated weaving. I had used the loom but not to do anything fancy. I finally dove in and wove a set of towels using 8 shafts of my loom and a weave structure that was new to me, block twill.

These were endless fun because they could all look so different! And I didn’t make them all navy blue and white! I hope you’re proud of me for that . . . 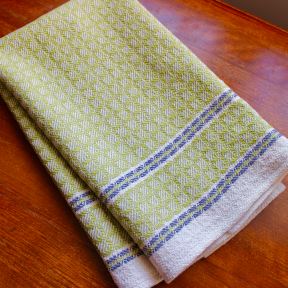 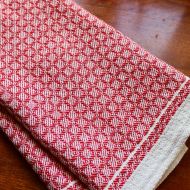 I’ve also made another set of towels on my smaller loom that have tickled me no end!

I saw towels like this at weaving school, in the bathroom we all shared. Each student chose a different color towel and it was ours for the week. They all hung jauntily on hooks.

I’ve wanted to make these towels ever since! 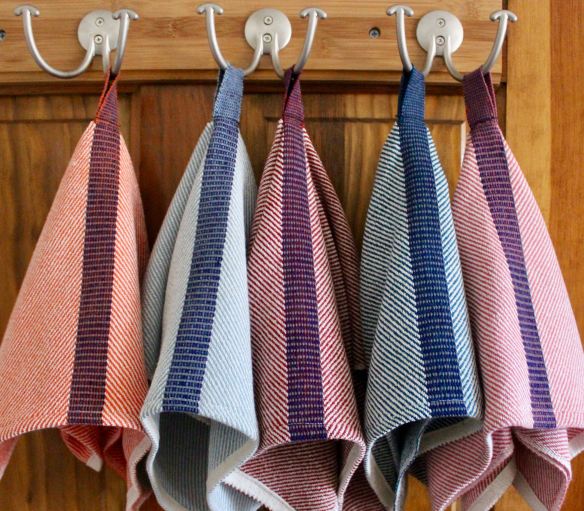 The hanging tab is integrated into the weaving, not sewed on after—how did that work?

I found something similar in a book and took notes but it still took me some time to figure out an approach.

I am inordinately pleased with how the towels turned out! I smile all the time.

And I’ve been weaving on my small band loom. I got this little loom, used it a couple times, and then it languished, looking cute but gathering dust.

But for the last month or so, I have been using it regularly, making bands and ribbons.

And thinking about what to do with all the bands and ribbons!

I made myself a hippie belt. 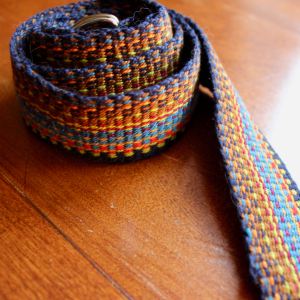 And a lanyard for my scissors and one for Don’s scissors.

And a key fob.

And I made another key fob that matches mine, to send to one of you!

If you would your name in a drawing for a handwoven key fob, just say so in a comment on this post. I’ll send it wherever the winner resides. I don’t think I’ll get around to choosing a winner until about April 19 so I’ll leave the contest open until then.

And may I just add—I hope you’re spending your days having at least half as much fun as I am! 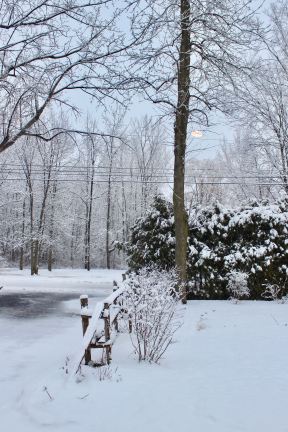 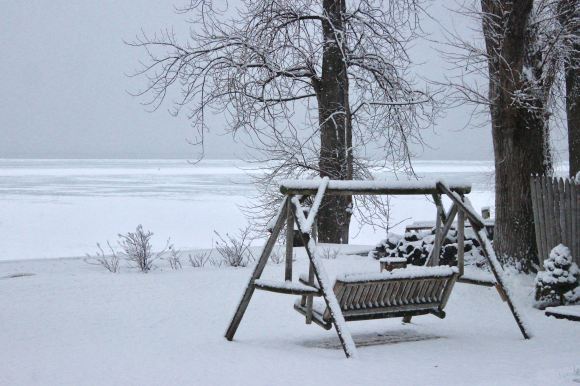