She lived her whole life in Vermont while I left upstate New York for many years, only to return and make my home here again.

Lately she found she needed a home so we invited her to live here. But she had to be willing to live in the garage until we found a place for her inside.

Does that sound mean? Making an older lady live in our garage?

It’s okay–she’s tough, and she’s happy to have a home where she is appreciated and can feel useful.

Our new housemate is a Macomber Add-A-Harness loom. Yes, another loom. 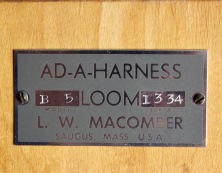 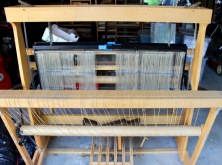 The Macomber company, started in 1936, is still in business and they could tell us that the serial number on our new loom meant the loom was delivered in late 1955 to Mrs. Maurice Jones of Montpelier, VT. Mrs. Jones, Jean, died at the age of 88 in 2013.

Her husband, Maurice, died just last year, at 93. When his belongings were dispersed, Jean’s loom sold at auction and we found it on Craigslist.

It’s a wonderful loom, sturdy and clean. It has 4 shafts but, as its name suggests, 4 more can be added, since the company is still going strong.

As often happens, the loom was sold with “extras”—when someone stops weaving, they have no need for the arcane tools of the trade.

And as much as I love the loom, it’s these extras that have really fascinated me.

Mrs. Jones went all in when she chose weaving as a hobby. She got books and magazines, some nice tools, and quite a lot of pretty thread. 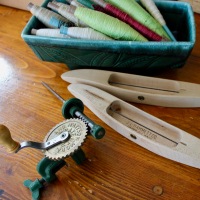 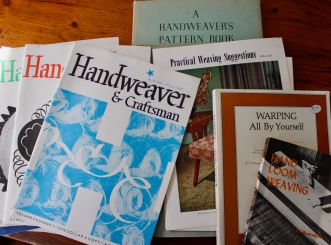 In the 1950s, when a person wanted to buy weaving yarn, she couldn’t go on the internet and look at pictures or ask for samples. Mrs. Jones had to write to companies and request samples.

And she did. And she kept every sample she received. 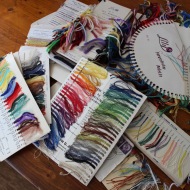 Yarns from Lily and Butterworth and Troy and Golden Rule. If none of these names are familiar, it’s because the companies no longer exists. The Lily yarn you can currently buy has nothing to do with the Lily Mills of Shelby, NC, and though Troy still exists, the company now sells quilting cotton fabric. The others . . . all gone.

Mrs. Jones records are a mini-museum of weaving in mid-20th century America.

Did she become a great weaver? The evidence suggests she did not.

The magazines are from the same years.

The items were all stored in newspaper-lined boxes, and the newspaper was from 1967.

It may be that she wove for a while. The man from whom we bought the loom remembers that, at the auction, there were hand-woven items and the auctioneer speculated that they were made on this loom.

Or maybe the weaving bug, that old arachnid, never really bit. And maybe the loom has been quiet for all these years.

I’ll keep Mrs. Jones records because I don’t know what else to do with them—I can’t just throw them away.

And all that yarn? Will we use it? That’s a tough one. When that yarn is gone, it’s gone forever, just like the once thriving textile industries is the United States . . .

But the loom will be quiet no more! Don has big plans for her.

She won’t live in the garage for long—at 60-something, she deserves better.