Have you ever taken part in a quilt/knit/crochet/whatever along? A blog extravaganza where people commit to sharing progress on a set schedule?

If so, have you felt motivated by pride or peer pressure or the desire to keep a promise and have you met that set schedule with enthusiasm, and grace, and promptness?

Three short weeks into the Hand Quilt Along and I am mortified to admit that I have made no progress whatsoever on my stated project! I teased you last time with a promise of a method of basting quilts that I claimed changed my whole, entire, attitude toward basting and told you I would share that with you in this post.

Not gonna happen. (But, as a consolation, I’m including a link to the YouTube video where I learned the technique that changed my life. It’s at the end of the post!)

I could give you a million lame excuses (travel, Thanksgiving, blah, blah, blah) for my lack of forward momentum but, instead, I’ll show you progress on one of the other projects I mentioned in my previous post. It isn’t, strictly speaking, hand quilting, and it won’t become, strictly speaking, a quilt in the traditional sense, but it’s close enough (or at least I hope you think so!)

I have done quite a lot of hand sewing on what will be, ultimately, some sort of throw.

The background: As some know, I collect and sell vintage linens. Among the lovely pieces I come across, I have found many that are damaged just enough that I can’t, in good faith, sell them.

They might have a dark stain or a hole or three. They might be orphan napkins or pillowcases that have known too many heads. And yet . . .

And yet, they often have a frill or a furbelow, a hand crocheted lace edge or a bit of hand-wrought embroidery, a pretty little something that someone bent her head over, labored over, and crafted with her own hands.

I have found over and over that I cannot throw these bits away. For years, I have sought a way to use them, to save the work of the women who made these things.

And then one day, in one of those early morning forays into the bottomless time suck of Pinterest, I saw a photo of what was being called a fusion quilt. The ones I saw were simply squares of pretty, but new, fabric that had been cut and sewed up and edged with crochet.

But I saw, clearly, in my mind’s eye, my bits and pieces of loveliness. 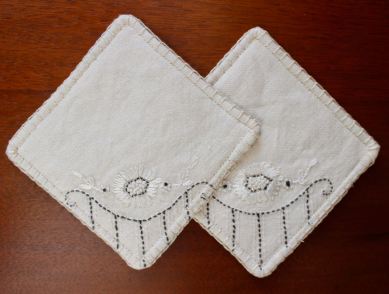 Orphan napkins; plus one had a hole 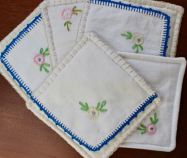 Napkins that were a mess but now are saved! 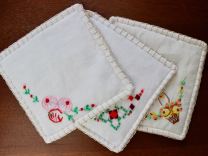 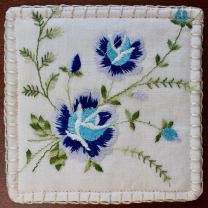 A torn hankie with one perfect corner 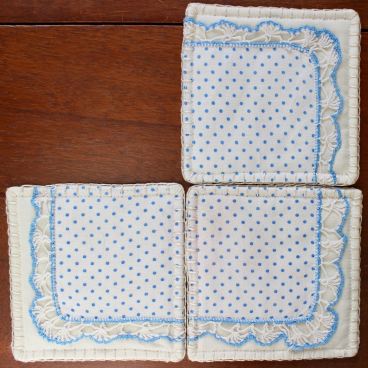 Three-quarters of this hankie were adorable; one corner had a blood stain

Each has three stages. 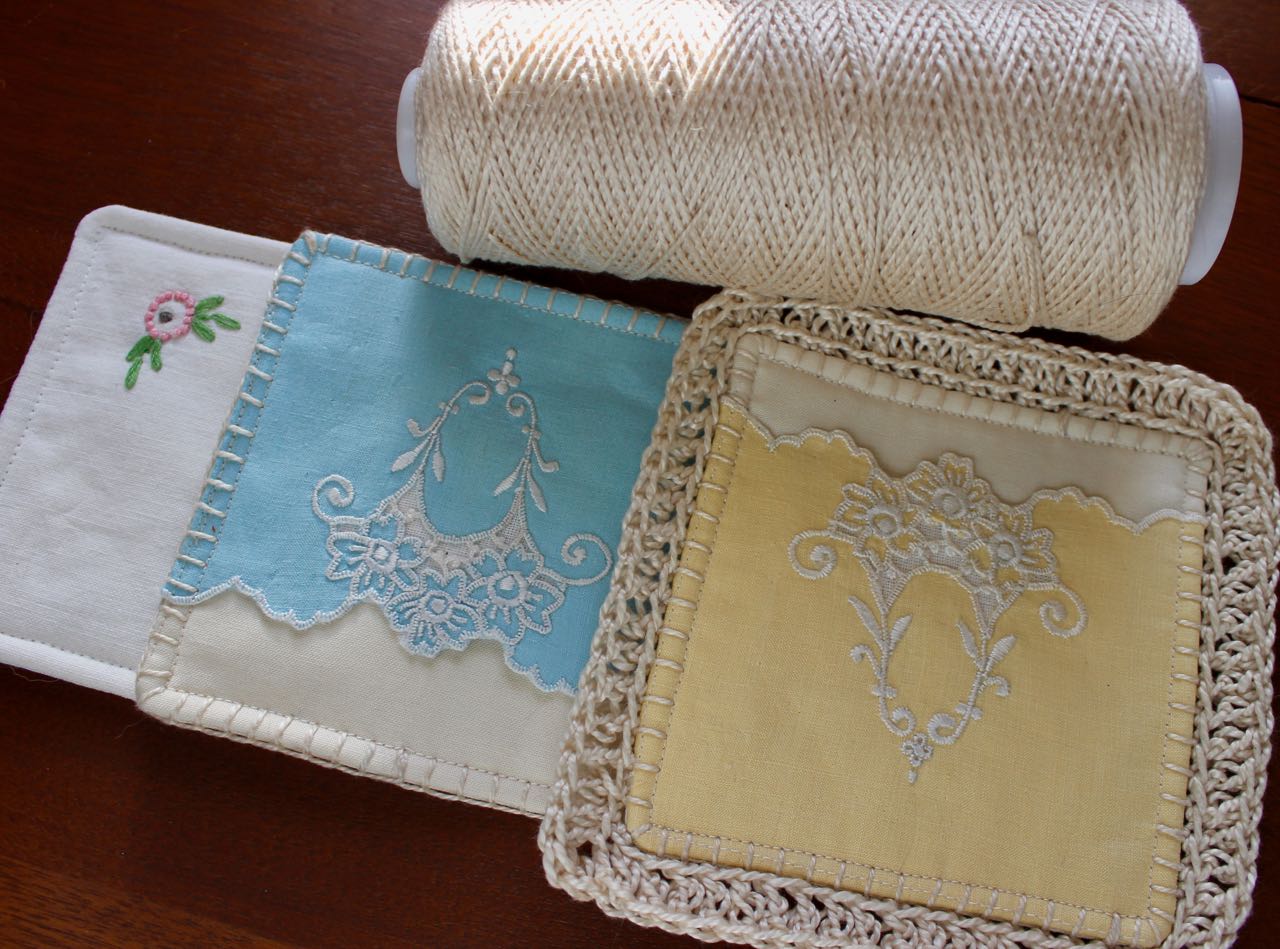 First, the basic padded square needs to be made, work I’ve done on a sewing machine. I cut the “fancies,” the batting, and the backing, sew them together, turn them inside out, poke out the corners, and top stitch around the edge.

Then, I do blanket stitch around the edge by hand.

Then, I crochet the edge on each one. Somewhere, down the road, I’ll crochet the individual pieces together, creating an expanse of vintage handwork, with a myriad of pretty details.

I currently have 20 squares finished to the point of needing the crochet. I am not a very good crocheter so I wanted a stack to do all at once so as to get a rhythm going—I have a stack now! 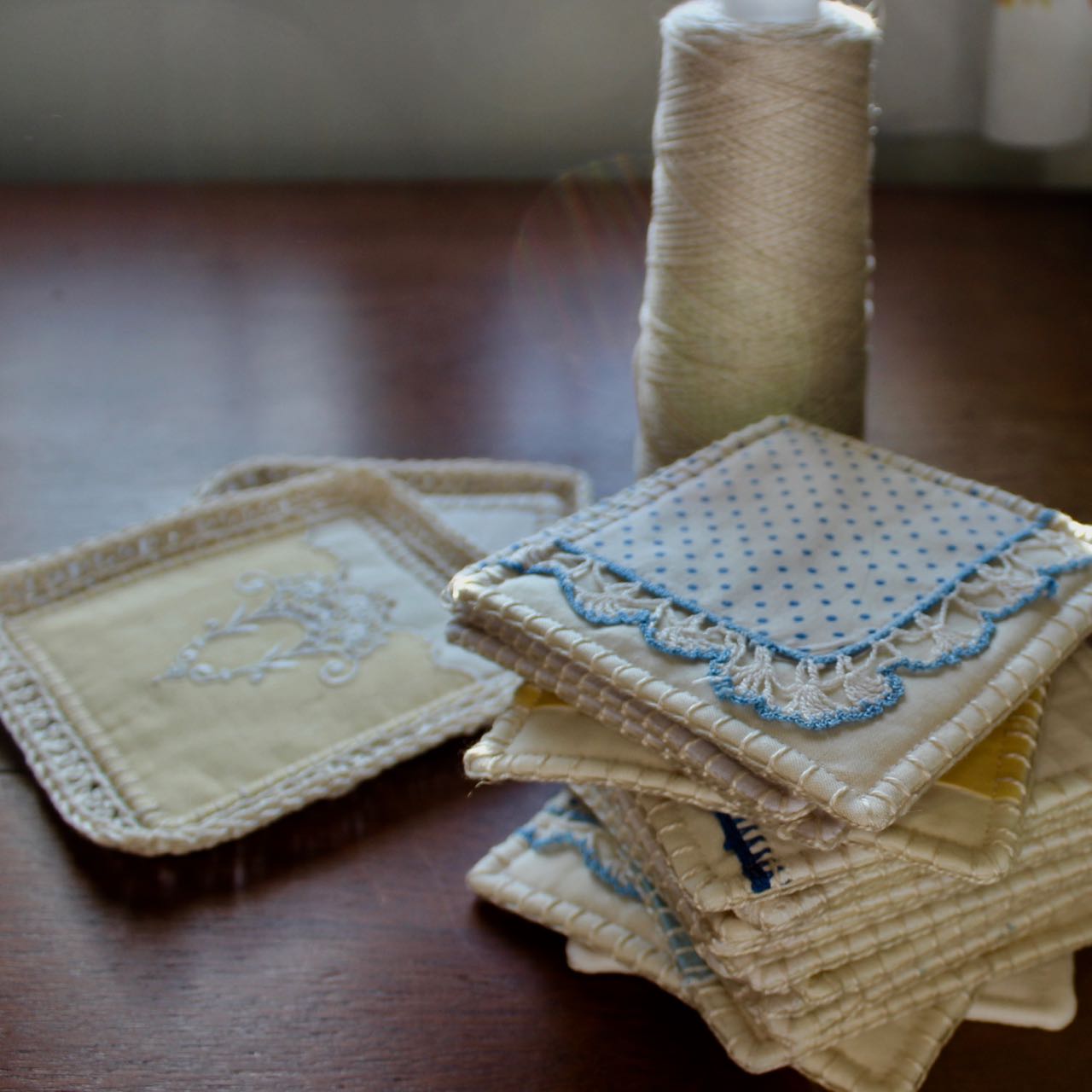 It used to be, when I was going through my linens, and getting them ready to sell, I’d be majorly disappointed when I found a damaged piece. Now I’m often thrilled!

This project has “me” written all over it—I’m doing handwork to preserve the handwork of women whose names I don’t know, whom I know only by their craft. Their work, sewn together in one piece, will be more than the sum of the parts and continue to draw the eyes and admiration of makers. I am honored to work in service of them.

And, yes, I still have a quilt to baste, a quilt that honors still other women who have shown me how to live! More on that in the next installment!

If you hate quilt basting and have wondered about different approaches, I highly recommend Sharon Schamber–Hand Basting Your Quilt.

87 thoughts on “Hand Quilt Along: A Fail and A Save”