It’s a project that fits me perfectly.

This one, this making of small squares for a so-called fusion quilt, is a perfect match.

It combines so many ingredients that make me happy.

The pile of pretty squares grows. I have about 24 blocks finished and 8 more ready for crochet. Each block makes me smile. Some are subtle, some are simply gorgeous, some are a little odd. 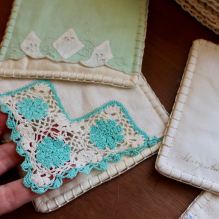 I know that I should be crocheting them together as I go. I know when I am faced with doing that stage, for all of the blocks, at the end, I will regret not keeping up with it.

But I am not prepared to make decisions yet about that final product. I don’t know if I’ll end up with 40 blocks or 150. I find new bits of prettiness that could be included almost every day. I’ll probably keep making squares as long as the squares keep making me happy.

And I won’t know how they should be organized and put together until I have them all in front of me.

Right now, I like seeing the stacks and shuffling through the squares, like a deck of cards, an encyclopedia of needlework techniques done by a sisterhood of stitchers and lace-makers and crocheters.

In your world, is there one activity, one project, one creation, that’s simply a perfect fit for you?

What image comes to mind?

For me, the image is of a plump, gray-haired lady (not woman, but lady), wearing an apron over a housedress. She’s sneaking a few moments away from baking bread and cleaning up after the grandkids to ply her needle. Her quilt is made of worn pieces of old clothing and she hums as she gently places her perfect stitches.

I’m a quilter. I’m not so plump, not so gray. I have no grandkids under foot and I seldom bake anything. And I’m no lady.

Let it be known that quilters come in all kinds of packages, with all kinds of political/religious/social backgrounds. We are young and old, women and men, and we use our quilts as a way of expressing our views of the world.

Quilting is not necessarily gentle and not necessarily lady-like. Many quilters have created quilts that are subversive and, in some basic way, the act of making something useful and practical and lasting, is subversive in itself.

When much of “women’s work” is work that is prosaic and almost immediately undone—the food is eaten and must be made anew, the clean house is dirtied, the neat beds are slept in—the quilts lasted. Quilts were a durable way a woman could say, “I am.”

I think that’s why I am enjoying my quilt for the Hand Quilt Along so much.

From the moment I decided to include the women’s rights quotations, I’ve gotten the biggest kick out of finding words from women I admire that most closely reflect the way I see the world.

Both blocks I quilted in the past three weeks have meaning for me in this way, one very obvious and one much more subtle.

The quote block I worked on most recently is a set of words from Elizabeth Warren, the Democratic senator from Massachusetts. She made the remark after Donald Trump famously called Hillary Clinton a “nasty woman” during one of the debates before the 2016 presidential election.

From that moment on, my highest aspiration has been to be a nasty woman, too. Nasty like Hillary and nasty like Elizabeth.

The pieced block I worked on this time is one of a number of traditional blocks that represent stylized trees and are often called by the name “Tree of Life.” Because I did most of my stitching “in the ditch,” or right in the seam lines, and because the stitches don’t show up against the pattern in the fabric, the block isn’t much to look at.

But working on it called to mind a beautiful song that is connected with this notion of quilting being a way for the maker to assert herself. Written by Eric Peltoniemi, and sung by Ann Mayo Muir, the song is called Tree of Life and the last verse says,

We’re only known as someone’s mother,
Someone’s daughter, or someone’s wife,
But with our hands and with our vision,
We make the patterns on The Tree of Life.

So, there we have the stereotype again—“someone’s mother, daughter, wife”— and the push back against it, the reminder that women, yes, even nasty women, are essential to the tree of life.

Heavy stuff for a Sunday morning. If you prefer a lighter look at the not-so-gentle craft of quilting, look at these needles I’ve ruined in the last two weeks! This is tangible evidence that quilting is not for the faint of heart or hand. 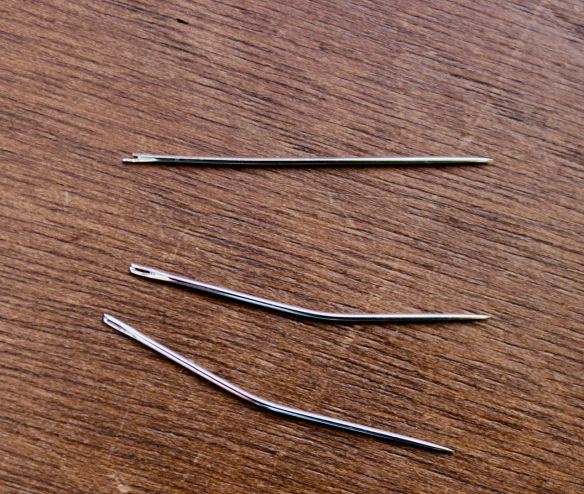 I’ve told everyone else, I guess I might as well tell you.

That sounds hideous, buying a servant, but I really needed to do something.

You see, my husband, Don, has always done most of the vacuuming that gets done around here. He doesn’t do it often, especially for a family with multiple cats, but I didn’t like to complain because he could then tell me, with some justification, to do it myself!

This has worked okay for people with a high threshold for dust bunnies but, and it’s a big but, Don has a torn (nay, shredded) tendon in his ankle, has been in quite a lot of pain, and is having surgery in a couple months.

The vacuuming was looming as my job.

So I purchased help. Her name is Minnie.

What I bought is a Roomba iRobot vacuum cleaner. And I love her!

We named her after the maid-with-attitude in the book, The Help, by Kathryn Stockett. If you’ve read the book, or seen the movie, let me just assure you, we won’t be letting our Minnie make any pies!

The way this works is the gizmo has all kinds of sensors so it can easily negotiate going from  hardwood floors to area rugs, even over 1.5 inch fringe. It can go under the bed (yes!), under chairs, right up along baseboards.

She is round but she can do corners. She has a brush that rotates, with long fingers that reach into corners and pull dirt into her maw.

She can zoom right up to stairs and stop just in time, pivot, and go back the other way. She knows not to throw herself off.

When I first got her, all I could do was watch her. She uses no discernible pattern for her work—she runs around in ways that seem completely random and, yet, she seems to find what’s there. When Don vacuumed, I would point and say, “You missed a spot.” With Minnie, you just have to trust that she will come back . . . And she does!

When she is finished, she takes herself back to her charging station and plugs herself in with a cheerful little ringtone—beedle, beedle, beedle-bee. Ding, ding ding!

In fact, she is relentlessly cheerful. No matter how often I ask, she makes a happy startup noise, like she is excited to help, and off she goes. She can work for about an hour on her rechargeable battery and it recharges quite quickly. And then she’s ready for more! The difference between her attitude and Don’s is, well, remarkable.

Once in awhile, not often, she gets stuck. And she asks for help. Really, she has a little voice. I’m never sure what she’s saying, because I am usually in another room, having fun or relaxing, but I hear her voice and go check.

There’s a app for my phone, so I can even get Minnie working without getting out of my recliner. It keeps track of how long she has worked, too. She came to work for us just before Christmas and has vacuumed a total of 37 hours since then! She’s vacuumed 66 times and she keeps track of “dirt events” during her work. I’m not entirely sure what that means—I think it’s that she notices enough dirt that she hovers over a spot to do deep vacuuming. I can’t bring myself to tell you how many dirt events she has addressed while here . . . it might negatively influence your opinion of me.

And what do the cats think of her?

They don’t mind her much! While they have not taken to riding around on her like all those cats on the internet, she is not nearly as noisy or clunky as our big canister vacuum and she doesn’t swear loudly while working, like some vacuumers who will go unnamed. . . .

I will admit, she’s not for everyone.

She works rather slowly. If you got a call that unexpected company was coming in an hour, you’d want to haul out your big vacuum and work fast.

She can’t do the whole whole house at once, at least not one with the kind of dirt events we have. I have her do two rooms at a time and kind of rotate her around so she does one or two areas a day, and then starts the rotation again.

She won’t always get every bit of dirt. Her motor blows some stuff away, like the lint created by weaving. Sometimes she tells me she’s done and I say, “No, no, no—get back to work.” But she takes that well and cheerfully starts up again. She has never once said, “Do it yourself.”

She didn’t come cheap. We didn’t get the top-of-the-line model. It costs nearly $900 and that’s crazy talk!

We got the Roomba 690 and she cost about $250, although I must’ve gotten her on sale because now the prices seem to be in the ballpark of $325. Yes, that’s a lot of money, especially when I won’t be getting completely rid of my big vacuum any time soon (although we have not used it once since Minnie came here to live!)

I thought long and hard about spending that much money. But I remembered reading an article that said that, since we can’t buy time, it makes sense to buy what we can afford that will provide us with time.

I could afford Minnie and she has given me time but also less guilt. Instead of thinking, “I should vacuum,” and then ignoring that thought and doing something fun instead, now I fire Minnie up AND do something fun instead. To me, that is worth the money I spent on Minnie.

Don will have surgery in a couple months and I will be doing the lawn mowing or snow shoveling or both, as can happen in April. I’ll be doing the cooking and running errands.

But I’ll leave the vacuuming to the help.