What image comes to mind?

For me, the image is of a plump, gray-haired lady (not woman, but lady), wearing an apron over a housedress. She’s sneaking a few moments away from baking bread and cleaning up after the grandkids to ply her needle. Her quilt is made of worn pieces of old clothing and she hums as she gently places her perfect stitches.

I’m a quilter. I’m not so plump, not so gray. I have no grandkids under foot and I seldom bake anything. And I’m no lady.

Let it be known that quilters come in all kinds of packages, with all kinds of political/religious/social backgrounds. We are young and old, women and men, and we use our quilts as a way of expressing our views of the world.

Quilting is not necessarily gentle and not necessarily lady-like. Many quilters have created quilts that are subversive and, in some basic way, the act of making something useful and practical and lasting, is subversive in itself.

When much of “women’s work” is work that is prosaic and almost immediately undone—the food is eaten and must be made anew, the clean house is dirtied, the neat beds are slept in—the quilts lasted. Quilts were a durable way a woman could say, “I am.”

I think that’s why I am enjoying my quilt for the Hand Quilt Along so much.

From the moment I decided to include the women’s rights quotations, I’ve gotten the biggest kick out of finding words from women I admire that most closely reflect the way I see the world.

Both blocks I quilted in the past three weeks have meaning for me in this way, one very obvious and one much more subtle.

The quote block I worked on most recently is a set of words from Elizabeth Warren, the Democratic senator from Massachusetts. She made the remark after Donald Trump famously called Hillary Clinton a “nasty woman” during one of the debates before the 2016 presidential election. 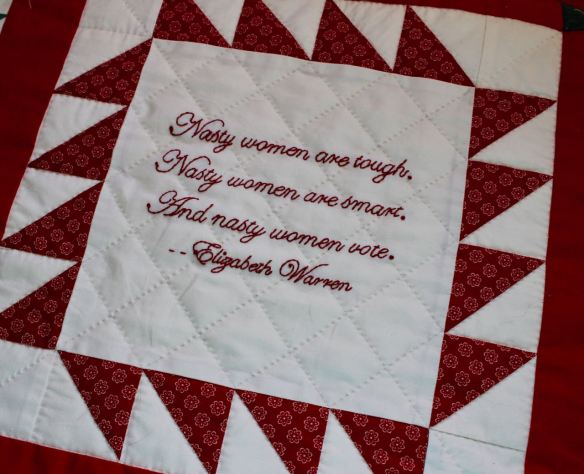 From that moment on, my highest aspiration has been to be a nasty woman, too. Nasty like Hillary and nasty like Elizabeth. 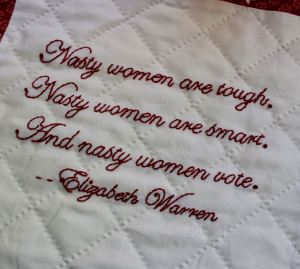 The pieced block I worked on this time is one of a number of traditional blocks that represent stylized trees and are often called by the name “Tree of Life.” Because I did most of my stitching “in the ditch,” or right in the seam lines, and because the stitches don’t show up against the pattern in the fabric, the block isn’t much to look at.

But working on it called to mind a beautiful song that is connected with this notion of quilting being a way for the maker to assert herself. Written by Eric Peltoniemi, and sung by Ann Mayo Muir, the song is called Tree of Life and the last verse says,

We’re only known as someone’s mother,
Someone’s daughter, or someone’s wife,
But with our hands and with our vision,
We make the patterns on The Tree of Life.

So, there we have the stereotype again—“someone’s mother, daughter, wife”— and the push back against it, the reminder that women, yes, even nasty women, are essential to the tree of life.

Heavy stuff for a Sunday morning. If you prefer a lighter look at the not-so-gentle craft of quilting, look at these needles I’ve ruined in the last two weeks! This is tangible evidence that quilting is not for the faint of heart or hand.