For those of you who make things, or garden, or write, or bake, or even take walks in the great outdoors, do you tend toward challenging yourself in new directions, pushing yourself to do more and more difficult? Or do you choose familiar, comfortable techniques and projects and paths to soothe you?

For most of us the answer is probably, “It depends.”

It depends on mood, other stressors in our lives, the time have available to work on a project, and maybe, basic temperament.

My basic temperament leads me to the familiar, the soothing, the comforting . . . the easy.

I don’t especially like fussy, complicated designs that seem, to me, overwrought. And I seem to have enough tenseness in my life without looking for more stress in my crafts. So I very often do more of the same, return to the familiar, make more of what I’ve already made, just variations on a theme.

But even I, sometimes, feel the need to push myself a little. My two most recent weaving projects, while not at all, in the least, wild and crazy, were forays into slightly different techniques.

And what I learned was that, even though I was moving away from my comfortable, known weaving, I was moving into weaving that was, almost immediately, as comfortable and manageable.

In other words, just because it was different, it wasn’t hard or stress producing or uncomfortable. And that was important for me to learn.

One project was kitchen towels. Nothing new and different about that! Kitchen towels, made of cotton and linen are, by far, my favorite weaving product. What made these towels a little bit of a walk on the wild side for me was that I used a weave structure I hadn’t before—called false damask—and I used 8 shafts, not for the first time but I haven’t used them too often.

Many (most?) floor looms have 4 shafts—when you add more shafts, you can achieve more complex designs. My loom actually has 12 shafts but I’ve not used all 12 yet!

The thing that drew me to this particular weave structure, was the way the checks on the towels look like they are made of interwoven bands.

For weavers, this pattern is #246 from A Weaver’s Book of 8 Shaft Patterns, edited by Carol Strickler. 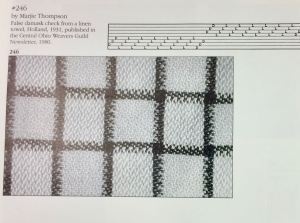 I honestly wouldn’t’ve looked at this draft twice if I hadn’t received email from my prolific weaving pal, Joan, with a photo of her towels. They were so fab, I had to do my own!

I like the yellow one best! And I wove coordinating tabs on my band loom. 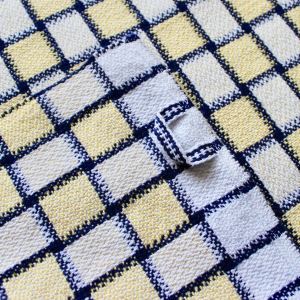 My other recent project was two scarves from one warp.

This structure is called Atwater Bronson lace and, honestly, it couldn’t be much easier! But it achieves this pretty lacy effect.

For weavers, this pattern is straight out of Next Steps in Weaving by Patty Graver. Her project is for a table runner in 3/2 cotton. All I did was substitute finer, 8/2 rayon and Tencel, which achieve the narrower width and a super silky drape and feel.

I used warp stripes in both a deep teal in Tencel and a variegated rayon thread that included teal, purple and turquoise.

I lined the lace “windows” up with the warp stripes so, when I wove the pattern, the windows alternated between the plain stripes and the variegated.

For one scarf I used the same deep teal as weft and, for the other, I used navy blue. I was surprised that I liked the effect of the navy better—it makes the brighter colors glow. The only other difference between the making of the two scarves is that the windows are shorter in one and quite long in the other. 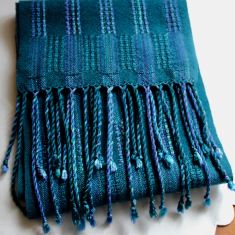 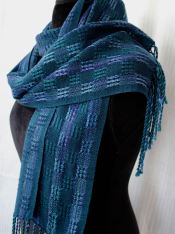 Both of these projects were a joy to weave. I expected them to be difficult and to create agita but they were both manageable and  . . . really easy.

I was avoiding branching out because I craved comfort and reassurance yet I found just those things by taking a baby step outside my comfort zone.

And I achieved a different kind of comfort and reassurance in knowing that I was becoming the kind of weaver who could branch out, who could attempt new approaches, and could be successful, without drama.

As I’ve said, I so pity Southerners and those who are struggling through an early spring.

They never get to spend hours of their lives, hours they’ll never have back again, watching icicles melt. And trying to catch the drips . . .

I pity the poor Southerner. I pity all those to whom spring comes early.

It’s March. They’re already sweaty, sweltering, with a sheen of oil on their skin. Here, the air is crisp and refreshing, invigorating even.

They have so little time to prepare for bikini season, it’s already upon them. Here, we have months . . . possibly years.

The bright sun means they have to wear sunglasses, and hide the windows of their souls. Here, our eyes are available to others and our pupils are widely, fetchingly dilated, to let in as much gray light as possible.

There, the bright, riotous colors of flowers are harsh and inescapable. Here, the white and shades of gray are soothing and undemanding. They settle for snowdrops while we enjoy snow drops.

Their sleep is rudely disrupted by the sound of raucous birds. All is silent here.

The pollen in the air means their eyes itch and theirs noses run. Here, we breathe free.

They toil in yard and garden, while we luxuriate with needle, thread, book, and brandy, in front of a roaring fire.

Their days are placid, boring, without excitement. Here, we await, with shortened breath and pounding hearts, the arrival of the next drama with a Christian name—Quinn, Riley, Skylar. Toby . . . is that you on the horizon? 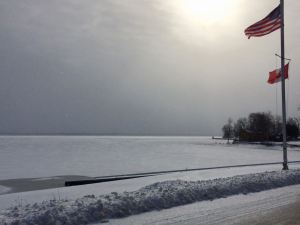 They pay gym memberships and go looking for ways to exercise. Here, we get our exercise for free—shoveling snow, pushing cars from drifts, building snow families. 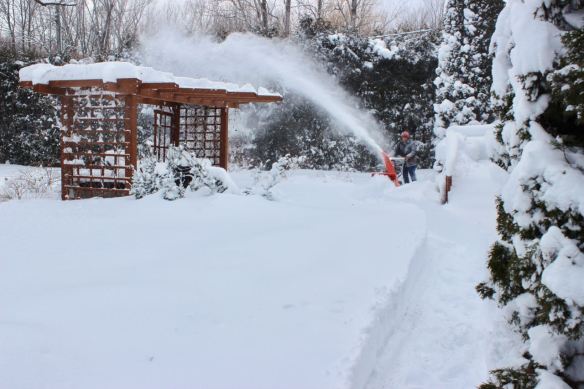 They drive on clear roads, never learning survival tactics. Here, we have the satisfaction of knowing the gut wrenching, bowel-loosening feeling of competence that comes with pulling out of an icy skid just short of the ditch.

They no longer enjoy know the sheer relief of hot chocolate in cold hands. The thrill of a snow day, listening to the radio and hearing your school’s name on the closure and cancellation list. The atavistic jolt of a fireplace that provides more than simple atmosphere.

No snow angels. No warm maple syrup straight from the boiler. No need for Irish fisherman knit sweaters and Bean boots and Yaktrax, while watching the St. Patrick’s Day parade..

Pity to all of you for whom spring came early . . . you’re missing so much.

The rest of us, this March, let us thank Providence that you and I are Northerners. 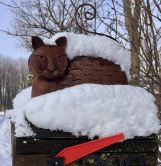 I have indulged in a few of these in my time, but the one what defines me, I’m embarrassed to say, is the one deemed the worst of all . . .

I resemble those remarks . . .

I could give you a hundred examples of my overweening pride but the relevant one is the state of affairs I face with my hand quilting project.

One week into this session, I was so far ahead of my self-imposed stint that I bragged a little to others. I talked about finishing my two bocks, PLUS getting extra blocks done so I’d have them finished as a buffer, in case I got too busy in the upcoming weeks . . .

I gloated to myself.

I took a few days off from quilting. I had plenty of time; after all, I was so far ahead of the game.

And, yes, pride goeth before a fall. And I fell.

Suddenly it was yesterday and I wasn’t done, or anywhere close.

So, I’m confessing my sin and seeking forgiveness—here is my progress for this session.

I do love the quote block I did this time and think it’s perfect for International Women’s Day.

The pieced star block, the one I didn’t finish, is pretty straightforward. As I’ve said I’m doing a lot of “stitching in the ditch,” which means stitching right into the seam line so the quilting itself isn’t really visible but it gives a texture to the quilt and, of course, holds the layers together.

To be complete, I need to stitch many diagonal lines like the one running from top right to bottom left.

And here’s an interesting tool that solves a huge problem of quilting—how does one quilt the straight edges and right-angle corners when using a round hoop?

I don’t have any idea where I got this tool but I would be lost without it!

So, back to my sins . . . I hereby repent my evil ways—I’m renouncing hubris; no more prideful boastings for me.

I’ve just realized that I have not written anything about weaving since mid-November!

That’s kind of crazy, really, since I weave almost every day and miss it when I can’t. I love weaving and when I’m not weaving I’m usually thinking about it, reading about it, wishing I could spend more time at it.

I guess I haven’t written about it for a few reasons.

Some of what I’ve woven hasn’t seemed that noteworthy. I wove a lot for two craft shows we participated in and, while the things I made were pretty and well crafted, they weren’t difficult or technically impressive, by standards of accomplished weavers.

Sometimes I’ve thought about a post about weaving but would think, “Oh, I’ll finish this project first and then I’ll write about it.” But then, I’d finish and immediately start a new project and the cycle would begin again.

Sometimes I’ve thought about a post about weaving but, honestly, resisted writing one more post that is nothing more than, “Hey, look at what I made!” That’s not really what I ever intended this blog to be, simply, a place for me to talk about myself and do a perpetual show-and-tell.

So, why am I’m finally writing the show-and-tell, catch-up-on-weaving post?

Well, since I spend SO much of my time at it, if I don’t write about weaving I’m not sure what else to write about. And I do want to stay in touch with you, through the blog, and I do want the blog to reflect where I am in my own “loving hands at home” world.

So, here goes nothing:

I’ve made a few scarves and have more on a loom right now.

I made several sets of these chunky placemats and similar coasters. These have been very popular and I should really make more . . .

I made a zillion coasters because Don wound a warp for coasters before he hurt his ankle. I decided to do the weaving, to free up the loom. He said the warp would make 15 coasters . . .  but 36 coasters later, I finally got them off the loom! 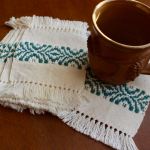 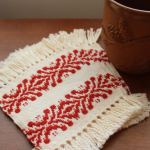 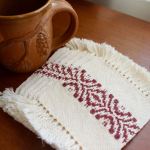 And I’ve made a LOT of towels. I continue to like making towels best of all.

Several of this type

This in several colors 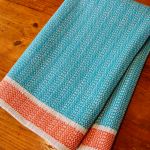 Blues for a friend

There! After waiting so long to do this, I have to admit it’s kind of fun to see all the weaving in one place. Thanks for indulging me . . . it’s great to have friends with whom to share!