I have an elderly friend who helps me in the kitchen. She knows I don’t like to cook, and she’s patient with that. She also knows that I love baking and making candy, so she’s given me some great recipes, as well as tips to help me improve.

Mostly, though, I just enjoy her style and listening to her talk. She’s funny, knows so much about setting a nice table, and what Americans like to eat. And she likes a strong drink!

My friend lives in my kitchen and has for all my adult life. Her name is Irma, Irma Rombauer. Her voice comes to me through her iconic American cookbook, the Joy of Cooking. She has been the friend in the kitchen to generations of American cooks and wanna-be cooks.

Some of you undoubtedly already know Irma, and love her. Others may have never heard of her but, if you’re an American who wants to cook or from another country and are curious about American cooks and cooking, you should make an effort to get to know her.

Irma’s book really has it all—it has history and an interesting back story, it provides insight to what it means to be American, it has useful information for every cook, no matter how inexperienced or expert, and it’s just plain fun to read. The book, as a whole, has the most distinctively “loving hands at home” tone and approach to making food of any cookbook I’ve ever seen.

An important note before I go on—there have been many editions of Joy and they vary quite widely, reflecting a changing America. They all have a distinctive, chatty tone with the exception of the 1997 edition, which was designed to have a more professional sound, with streamlined recipes. It that edition, the cookbook, to me, becomes just another cookbook. The reasons I’m giving for loving the book apply to earlier editions. Apparently the 75th anniversary edition, published in 2007, puts the author’s voice and style back into the book.

Joy of Cooking was first published in 1931 by Irma S. Rombauer, a homemaker from St. Louis, Missouri. The year before, her husband had committed suicide and she was going through a difficult time, both emotionally and financially. Her children pressed her to focus on a cookbook. And what a cookbook it became!

Unlike other cookbook writers of the time, Rombauer, a “complete amateur with no official credentials . . . knew that neophyte cooks somehow learn faster in the company of a friend. This small, chic, witty, and immensely forceful woman appointed herself that friend.”  Irma Rombauer has remained a friend to American cooks throughout the generations. And, like my other friends, I call her by her first name.

The 1931 edition was self-published but by 1936, Irma had found a publisher and the book started to reach households all over America. Since then, the book has gone through a number of printings and each printing seems to have devoted followers. If you’re interested in the full story, visit the website of the Joy of Cooking Trust.

My own copy of Joy was published in 1946 and was given to my mother, by her mother, as a birthday gift in 1949. The book is beat up and shabby, with pages sticky and stained but the recipes still intrigue and guide me, especially the chapter on candies and confections!

The recipes intrigue me partly because many of them are solid recipes for food I want to make. But these days, because I can find recipes in so many places, in other books or online, I’m not sure this book would get used much if the recipes were all it had. It’s the other things that Irma brought to the book that set it apart.

I love this book partly because it’s a look into America at a certain time and place. And, with each edition, we can see a changing America. Recipes in the early editions reflected a more rural America and taught how to cook squirrel and venison and provided long, detailed guidance for canning and pickling.

In the 1943 edition, Irma included information about how to deal with the food rationing brought about by World War II and included strategies for substituting new ingredients for rationed ones. For example, she explained how to substitute soybeans for meat.

For readers looking for a modern cookbook, in the traditional style, this can be annoying. I’ve seen reviews that indict the book for “too much retro-inspired nonsense.” But, if you’re like me and love “retro-inspired nonsense” and a peek at America’s past—the world of our mothers and grandmothers—the details are all part of the fun.

And the more recent editions did find Irma keeping up with the times, as she chronicled changes in American eating patterns. She offered recipes for changing needs, like streamlined meals and the use of canned and frozen foods, and changing desires, like an increased focus on healthy eating.

Another part of the fun is that Joy is just delightful to read. In some ways, the tone of the book reminds me of today’s cooking blogs—they all have recipes but what brings readers back to certain blogs is the chatty, friendly tone of the blogger—the extras that surround the basic recipe.

Irma wrote like she was your pal, more experienced in the kitchen but not lording it over you. The recipes aren’t written with all the ingredients at the top and then a terse list of instructions but, rather, in a sort of narrative with the ingredients in boldface as you come to them. She provides extra details in the midst, like to just ignore lumps in the muffin batter, and leads the cook to completion.

Irma lets you know what she likes. She introduces a recipe that starts with two cans of condensed soup by saying, “I should like to sing a paean of praise about this . . . soup” and talks about her food mill, saying, “I am devoted to mine and shall reward it some day with an old age pension.” She also lets you know what she doesn’t like, including at least one recipe for a cake that is “uninteresting . . . but highly digestible.”

She also wins my heart because she includes lots of recipes for cocktails, including one for hot buttered rum that “has been said to make a man see double and feel single.” And she quotes Mark Twain on the subject of imbibing—“Too much of anything is bad, but too much whisky is just enough.”

And along the way, she tells stories about kings and queens and opera singers, and throws in quotes from sources as varied as The New Yorker, Noel Coward, and Gilbert and Sullivan.

But the book isn’t all quaint, old-time recipes and cleverness. It also has a wealth of valuable information for cooks at all levels. Irma includes an index that explains, in very plain words, cooking terms that experienced cooks take for granted but that might mystify a novice. For instance, she delineates the differences between beat, combine, stir, and mix. I didn’t know there were differences! And the differences between peel and pare—knowing the difference makes me feel like a real cook!

The book is great for novices, but many of the recipes are sophisticated and challenging, and Irma alerts readers to ones that are finicky or troublesome. She writes in detail to de-mystify notoriously difficult tasks like making soufflés and candy making, and her tone is always calm and patient. She will even offer advice about how to save a recipe gone wrong.

In addition to recipes, the book also includes information on all kinds of household management. She discusses how to use leftovers and how to impress guests. She provides sample menus for meals as varied dinners and picnics, tables of equivalents, ingredients substitutions, diagrams for setting a table—something for everyone! 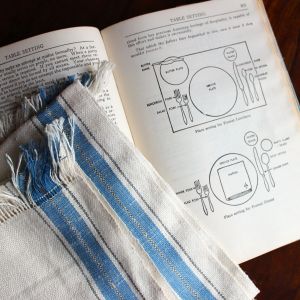 In other words, Irma is a friend we all need. The woman herself died in 1962 but the cookbooks live on, with new editions still guided by her descendents. And lucky for us, earlier editions of the books are readily available though on-line booksellers and on eBay. Or, if you’re lucky, your mother or grandmother may have a copy, just waiting to be passed on to you.

Now that you and my friend, Irma, have been properly introduced, maybe you’ll invite her into your kitchen. I think you’ll find her a warm, wise friend.