I’ve been quilting along on the quilt along.

In the three weeks since we last reported in, I’ve done two blocks. I think this will be a reasonable goal as I progress. It’s a pretty relaxed pace but there are other things I like to do, too, and I want to fit it all in.

One of the blocks I worked on is a patchwork block.

I needed to decide on a quilting approach—where would I put the stitches?

And why quilt at all?

One purpose of quilting is to hold the three layers of a quilt together. Another, less obvious, reason was to keep the middle layer, the batting, from shifting. Older battings, sometimes no more than a layer of raw cotton, could clump and separate and shift. I’ve seen old quilts that have big lumpy sections and completely flat, empty sections because the quilting was insufficient and the batting all went where it could.

Today’s battings are made very differently and quilting lines can be spaced much more freely. But the third reason for quilting is that it makes an attractive pattern on the quilt surface, so that determines where the lines go, too.

Many quilters mark their entire quilts before they start quilting, using stencils. I’ve said I don’t enjoy the process of tracing a stencil design on fabric, in order to do fancy quilting patterns. I’m a pretty lazy quilter, as it happens.

That makes masking tape my favorite quilting tool, both the quarter-inch tape made for quilters and the stuff I buy at the big box hardware stores. I can put the tape down to create nice straight lines, along which I stitch. 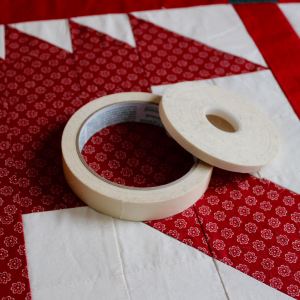 I tend to make up my mind as I go along, about where to place the tape, and I change my mind, too, as I go along. Sometimes it works well, sometimes I’m a little disappointed.

I thought this block was done but, now that I’ve seen these photos, I think I will want to go back and add some more lines, not because they are necessary to keep the batting from shifting, but to improve the look.*

The other block I worked on was the one with the quotation from Malala Yousafzai. 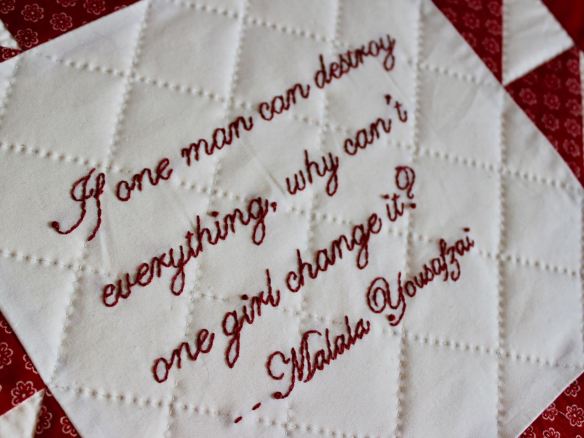 Malala, as you know, is the youngest recipient of the Nobel Peace prize, for her work as an activist for human rights, particularly for the education of girls and women.

These words from her come from her book, I am Malala, published in 2013. I’m not sure who she had in mind, when she spoke of “one man,” but her comment seems especially relevant in 2018. I know she couldn’t’ve been talking about the the “one man” I think of who could, and may be, destroying the world, but still . . .

As I quilted her block, I thought about the fact that she Malala didn’t ask why one girl couldn’t fix the world; she simply hopes to change it.

Her comment makes me think about the ease with which one powerful person can bring about negative change and the difficult, united work it will take to put things back together again—as Malala suggests. One girl may bring change but it will take many—girls, women, boys, men—to work together to fix our world.

One of the things I love most about hand quilting is the mental space it gives me to think while I work . . .

* Don’t worry about the hard little wrinkles you see—they came from that section being squinched in the quilting hoop as I worked on the next block. They’ll go away.