Samplers from the collection at Shelburne Museum, Vermont.

One of the wonderful things about being a maker is the choices we have available about what to make. Depending on your interests, values, and aesthetic sense, there’s a craft or art form for every taste, from A to Z.

As our hands shape our chosen materials, we are shaped by the work we do. This was perhaps never more apparent than in the tradition of girls and young women making needlework samplers, especially in early America.

These samplers taught so much—the alphabet, the building blocks of literacy, and often a moral precept, but also focus, concentration, and amazing eye and hand coordination, especially considering that simple samplers were stitched by girls as young as five or six. Eleven- and twelve-year-old girls made elaborate samplers, with superbly tiny stitches that would challenge you and me.

Just as the samplers taught the girls much of what they knew, they also teach us much of what we know about these girls and of women and their roles in these early years. Even the names of woman were rarely recorded in official ways in the 17th and early 18th centuries and so much of women’s work was work that was regularly undone and didn’t last.

Food was prepared and was consumed, and more food needed to be made. A home was cleaned, a bed was made, a garden was tended and all needed to be done again the next day. All were relentless, repetitive works in progress, with no lasting artifacts to remind us of the names and contributions of women.

So, in our abecedary of craft forms, it’s appropriate that alphabet samplers come first, since they were the craft that came first for young girls and because they provide tangible evidence that women make.

Women didn’t have printed instructions, much less the Internet, to learn from so, when they saw a stitch that was new to them, they would stitch it on cloth, as a reminder. This sampler of stitches was added to over a woman’s lifetime and examples of these collections survive from the 15th and 16th centuries.

It was probably only a matter of time until these collections of stitches turned into something of a competitive sport and samplers evolved as more elaborate and showy, a way for a woman to show off a little, as seems to have happened in 18th- and 19th-century Europe.

These showy samplers didn’t make a lot of sense for European women who came to North America, though:

the settlers in America had a new wilderness to conquer and the need for elaborately decorated linens and clothing was not a necessity to them. What was common luxury in ‘civilized’ England was not important in the new land.

What was deemed necessary in early America was the education of girls to become resourceful and pious women, and good wives and keepers of a home. The alphabet sampler was an important aspect of this education. The alphabet sampler, while not original to the United States, was certainly embraced by new settlers of the English colonies, to teach their girls.

From 1645, when the earliest-known American sampler was made by Loara Standish of the Plymouth Colony, girls spent hours of their days, producing stitched alphabet samplers. It seems amazing to me that young girls, usually between the ages of six and twelve, had the coordination and concentration to make these stitches. Can you imagine any 10-year-old you know handling this task?

These samplers were teaching tools, giving girls a way to learn and practice stitching, letters, coordination, and lessons in morality. They could then demonstrate their ability to mark linens, in order to keep track of them in a household, as well as demonstrate piety and values to possible husbands.

The completed work was usually framed and hung in the parlor, proclaiming the maker’s obedience, patience, and skill. . . . The verses found on many samplers reinforced these messages, emphasizing the importance of female virtue, the value of education, and obedience to one’s parents and to God.

That so many alphabet samplers survive, even though they are made of relatively fragile threads, gives us a good sense that the women who made them treasured them. And why wouldn’t they? The samplers were evidence that a woman could make a mark that would last, unlike so much of the work assigned to women in those years. The permanency of thread on linen, along with the name of the maker, gave many women the only tangible item that might outlast them.

The simple designs of these samplers are still treasured by needleworkers, who reproduce the designs faithfully from patterns offered for sale. Today’s patterns connect modern stitchers to a long, homely tradition: 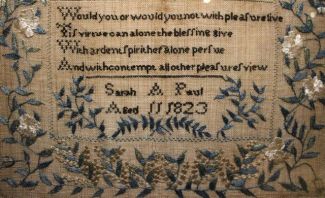 For more information about samplers, including alphabet samplers, and many images visit Antique Samplers.