“Inch by inch, row by row,
Gonna make this garden grow,
All it takes is a rake and a hoe,
And a piece of fertile ground . . . ”

I was singing this song by Dave Mallett long before I ever tried to grow a garden myself. I came to gardening kind of late—on the farm where I grew up, there were growing things everywhere but I didn’t take part in the intentional growing of flowers until I was in my 30s, probably. But Mallett is right—gardening is pretty straightforward, and so satisfying.

Gardening has become a big part of my “hands at home” approach to life. Maybe nothing connects us to the place where our homes sit as much as getting outside and adorning the spot with plants that reflect our tastes and, in a way, tell our tales.

I’m sure I’ll write more abut gardening but today I want to feature a plant I only learned about last year. It’s at its best right now and deserves the limelight!

The plant in the photos is ornamental hops. Yes, hops. The stuff of which beer is made! We planted it last year, one little dinky plant at each end of this cedar fence. Over the winter it died back to the ground and I thought maybe it wouldn’t come back—the winters are rough in upstate New York!

But come back it did, with vigor and determination. The photos show growth from this spring to early August. In the spring, I wear it was growing a foot a day!

I’ve helped it along by tying it, with green ribbon, to the fence. It doesn’t attach itself like a climbing hydrangea does although it will curl around small objects (like the necks of nearby flowers!), so it would probably climb by itself on a trellis.

Just in the past couple of weeks, the hops have appeared on the vine; they’re those little fluffy-looking pods, shaped like pinecones. I’ve been fascinated with them and have dozens of photos! 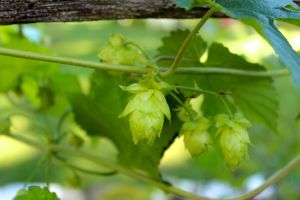 As pretty as they are and in spite of the “ornamental” in the name, these hops cones can be harvested and made into beer, although I’m sure there are other cultivars of the plant that you’d grow if beer making were your primary goal.

No beer making for me—I don’t want to put all those established beer makers out of business, so I’ll keep buying theirs! But, if you’re looking for an easy-care plant for a large space, one that makes a major statement and provides visual interest from early spring through fall, you must consider ornamental hops!

So, come on now, everyone, join in for one last chorus:

“Inch by inch, row by row,
Someone bless these seeds I sow,
Someone warm them from below,
Till the rain comes tumblin’ down.”