“Now, Kerry, it’s your turn. What did you bring for Show and Tell?”

Show and Tell? I loved Show and Tell!! Showing off was disapproved of at our house when I was a kid but, once in awhile, at school, we were allowed—nay, encouraged—to show off. At those times, showing off was an officially sanctioned event.

Some days I feel like I’m using my blog the same way—as an opportunity to show off a little, under the guise of waxing rhapsodic about all things handmade.

And today is one of those days!

I’ve already gotten a lot of blog miles out of my green striped dishtowels. You’ve all been so patient and attentive in the past, that I’m trotting them out one more time. They’re finally finished, hemmed and everything, and I’ve taken the glamour shots.

These were the towels that got me so excited because I was able to weave four different patterns after threading the loom just once. It doesn’t take all that much to make a new weaver happy!

At the end, when I had the three planned towels done, I changed the weft (horizontal thread) color from off-white to green. Again, this changed the look of the patterns hugely. 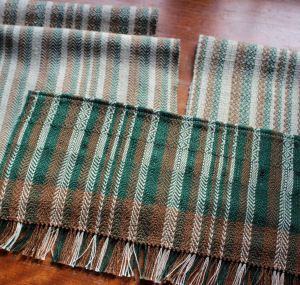 I also tried hemstitching for the first time. This is a finishing technique that is done while the fabric is still on the loom. The effect is neat and tidy, and reminiscent of the vintage linens I handle all the time. I’ll be using it a lot!

The towels aren’t perfect, of course. They are too small for my taste and I did the hems on the sewing machine and I still haven’t reached détente with my sewing machine.

But, they have far fewer mistakes than the last set of towels I made, I tried some new techniques, and I got a sense the possibilities on my little four-harness loom. It’s all good!

Sigh. Show and Tell is over for today. Now it’s time for Reading Circle and Arithmetic . . . and recess! I loved recess!