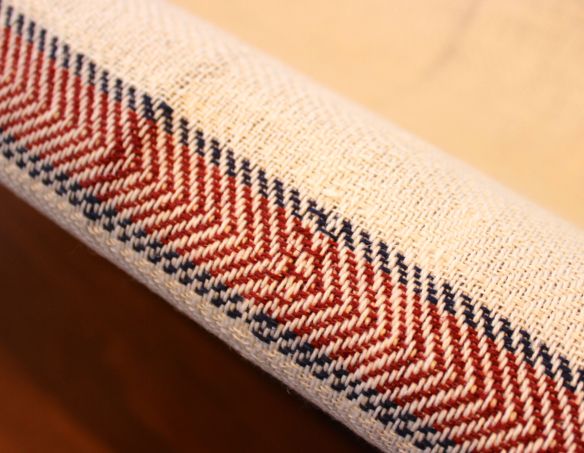 Me: Rats. It’s not perfect.

The ME I want to be: Relax. You’re new at this.

MIWTB: Making mistakes is part of the learning process.

MIWTB: You said you were just experimenting, just having fun weaving.

MIWTB: You claim you like the imperfect and idiosyncratic!

MIWTB: It’s not the last thing you’ll ever make! The next project will be better!

Me: Yes, but this one’s not perfect.

Me: I know. But it’s not perfect. I wanted it to be perfect.

MIWTB: Do you think our foremothers got hung up on tiny mistakes in utility items? They had bigger things to worry about!

Me: So what? I wanted mine to be perfect.

MIWTB: But look—there’s no question it’s made by hand! Did you want it to look machine made?

Me: Well, no. I wanted it to look perfectly handmade.

MIWTB: Aren’t you the one who’s always yammering on about the human touch and seeing human fingerprints on the things we make?

Me: This is different. It’s so obvious! People will think I’m not perfect.

Me: I’ve noticed that whenever you start a sentence with, “No offense,” the rest of the sentence is really offensive.

MIWTB: Yes, well, some things need to be said.

MIWTB: Shhh, it’s time to stop whining and get back to work. 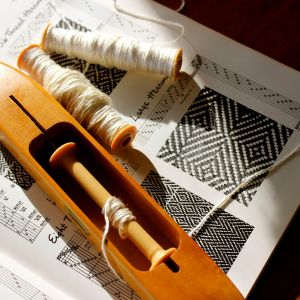 My husband and I have issues with impulse control. It’s no secret.

When we discover a new hobby, we don’t tiptoe in and explore cautiously. No, we pounce with fervor, dive in head first, go hog wild.

This explains how we came by the room full of metalsmithing tools and lapidary equipment. And the piles of quilting and cross stitch supplies. And the 300 pounds of chocolate and the piles of vintage linens and the nice bikes and ice skates and snowshoes. I could go on.

We started weaving as a direct result of our impulse control issues. Neither of us knew the first thing about weaving when we saw the big, old loom at a garage sale. It was only $150 and came with a lot of stuff. We had no idea what that stuff was, or how to use any of it, but there was a lot of it, it looked really cool, and it seemed like a good deal.

So, we bought the loom, wedged it into the garage (did you know that some people put their cars in their garages?!), and a couple of years later, we took the classes in weaving I’ve told you about.

And we love weaving!

And love, as you may have experienced yourself, wreaks havoc with impulse control, which we never had much of in any case. And all this explains how, in a recent 24-hour period, we came to have six looms in our house.

We have the big, old 150-dollar loom, which turns out to be incredibly idiosyncratic and difficult to weave on. We have the borrowed table loom, which I loved but wished was wider.

And now we have four other looms that we bought within 24 hours. As I said, impulse control issues.

First, we heard about some people nearby who bought two looms, years ago, for their daughter. Such thoughtful parents! But the ingrate daughter said, “I never said I wanted a loom!” and the looms went into the loft of their barn.

Then, the very day we bought the counterbalance loom and the tapestry loom, we heard about a garage sale an hour away. A weaver, selling all her equipment because she has decided to be a quilter (it’s just possible we aren’t they only ones with impulse control issues).

We said, we don’t need any more looms or weaving paraphernalia but let’s just go look . . .

And we came home with two more looms. One big loom, in far better shape than the first one we bought and with eight shafts or harnesses, and that pleases my husband. 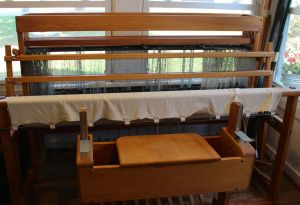 And pretty, too! Made of cherry!

With these looms came lots more stuff—benches and books and shuttles and yarn and magazines and cool stuff!

The first big, old, idiosyncratic loom is back in the car-free garage and it may end up as kindling. The table loom will be returned to its owner. The tapestry loom . . . ai yi . . . who knows what will become of the tapestry loom.

And, for now, we have three looms set up in one room in our house. An embarrassment of riches, and looms, for sure.

I’d feel a lot better if I thought we weren’t the only ones with impulse control issues. Anyone out there willing to fess up? 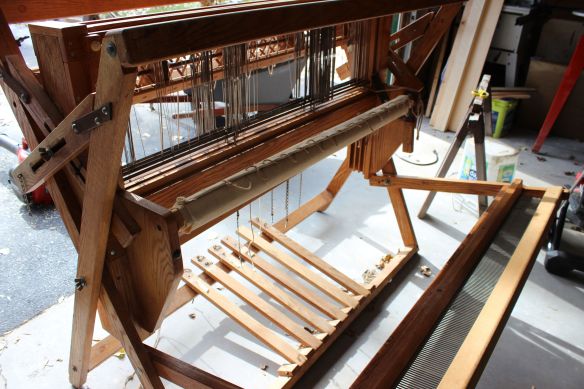 I wouldn’t want you to think I’m a slacker so I will give you the most recent news, although there will be more to come.

I, with my husband, signed up for a beginners’ weaving workshop offered by our local Arts Council.

The classes start a week from today and will lead us, we hope, to finally making sense of the biggest, dumbest impulse purchase we may have ever made.

We’ve been meaning to learn to weave because last year, at a garage sale, we bought a humongous floor loom. We bought it even though it’s a) humongous, b) we have no place in the house for it, and c) we have no idea how to use it! But we got a great deal on it!

It has been sitting in our garage, mocking us in a slightly sinister way, ever since.

But that’s all going to change. Pretty soon I’ll be throwing around words like warp and weft and heddles. And stalking blogs about weaving, trying to figure out what I’m doing.

God knows, I need a new hobby. To fill up my free time.

Do you know how to weave? Any basic words of wisdom for us?