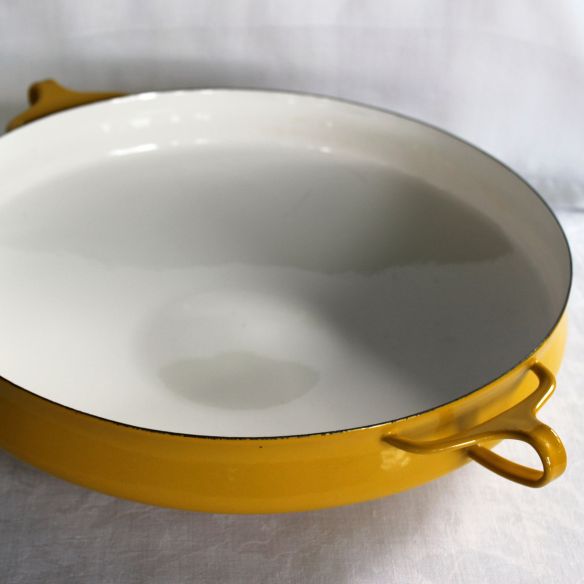 In two and a half years of selling vintage treasures on Etsy, the online marketplace, I’ve found loving homes for a lot of cool stuff. Mostly I sell things that I like a lot but that don’t fit my very relaxed lifestyle or that I simply don’t have room for.

Every once in a while, though, I regret parting with one of my beauties.

One such regret is this fabulous Danish Modern paella pan. 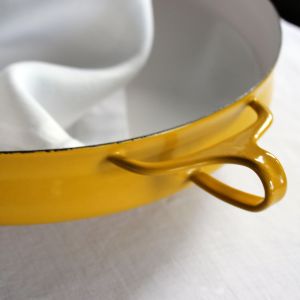 These pans were made by Dansk in the 1950s and ‘60s; the line is called Kobenstyle. The exterior color was a rich, deep yellow enamel–the color of French’s mustard. The interior was glossy, bright white with a thin black hint of metal showing around the edge.

I found the pan at a garage sale and I could see it was special. Even though my usual taste does not run to Danish Modern, the pan was priced very reasonably and in perfect condition, so I bought it with the intention of selling it.

After I took photos of it and listed it on Etsy, I put it out on my coffee table, just as a place to keep it until it sold.

And I got used to seeing it there. It was sunny, and sleek, and made me think of a perfect fried egg.

In the couple of months I owned the pan, sometimes I’d fill it with fruit but mostly I thought it looked great empty.

But it was rarely empty.

Because it was the perfect size and shape for a cat. 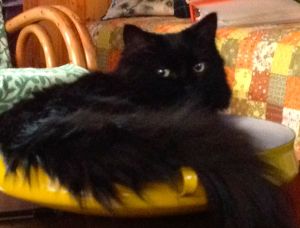 And when a cat wasn’t sitting in it, it made the most amazing cat toy. The concave interior shape of the pan made it just right for containing a ping pong ball.

A cat could (and did) bat the ping pong ball around the slick interior and it would sail around that perfect groove, making the most fascinating zhoop-zhoop sound. Once in awhile the ball would go flying out, and bounce around the room, providing more fun.

But then, just when we got really attached to it, someone bought the pan. I heard the special “cha-ching” that the Etsy app makes on my phone and checked to see what had sold.

Oh, no! My pretty bowl. My cat’s favorite toy and spot to nap.

There was nothing to do but package it up and mail it off to its new lucky owner.

I found a ceramic bowl I had sitting around, to put on the table. It’s sort of the same shape but has never caught on, with the cat or with me. It’s pedestrian and has none of the verve of the Kobenstyle bowl and it doesn’t make a ping pong ball sing either.

So, now I have one more thing to look for when I go garage saling. Maybe someday, I’ll find another yellow Dansk paella pan, to replace the one that got away. The cat hopes so!