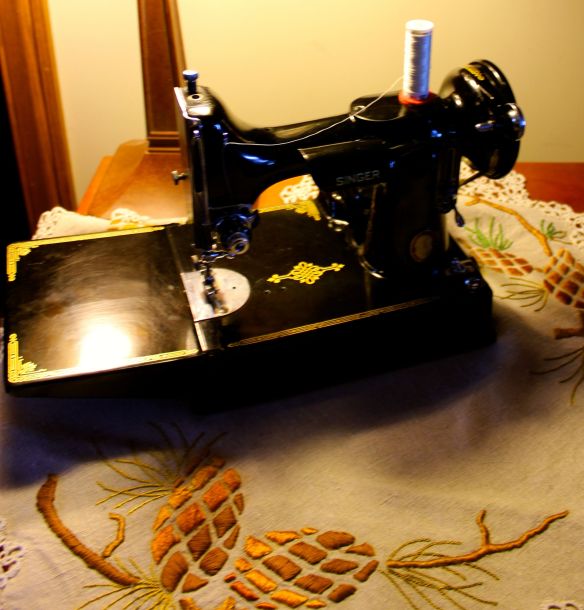 Serendipity swept down the street and stopped at my house yesterday,

It all started when I finally did something I’ve been meaning to do (IBMTD) for ages and, in doing that one, I managed to knock off two other goals at the same time. I hit the trifecta!

I’ve had the intention to call Mr. P., the wizard of sewing machines, for ages. Every time I talked to anyone who sews, his name came up, and everyone raved about this man. “He’s kind.” “He’s sweet.” “He can fix anything.” “He’ll come to your house!”

I’d been meaning to call him but am so phone-averse that I just kept putting it off. But as I’ve been trying to work on my quilt project, the need became more pressing. Every time I used the machine, the thread was constantly leaping out of the take-up lever and jamming everything. I’m bad enough at sewing without having to deal with that!

So, I called Mr. P. and he came later the same day—all the wonderful things I had heard about him were true! He cleaned and spiffed up my mechanical machine, and now it works just great.

While he was here, I brought up the subject of my fancy computerized machine. I have had this machine for quite awhile and I LOATHE it. It has been a big computerized albatross around my neck for years and has generated quite a lot of family lore, in all of which I come across as a fool.

Everyone else who has this kind of machine loves it but I have not been able to reach any sort of détente with mine. Some will say the fault, dear Kerry, is not in the sewing machine but in yourself. Whatever.

The fact was, it was not working, yet again, and I asked Mr. P. about it. He, the sewing machine whisperer, couldn’t fix it.  The nearest location where it could be fixed is a two-hour drive away. Ai yi. Here we go again.

Fast forward in the discussion.

I was talking about how much I like a mechanical, as opposed to a computerized, machine. I mentioned how a Singer Featherweight seemed to be just about my speed and how I’d always wanted one.

And he, lovely man that he is, came up with a solution that made both of us happy—we could swap. He would take the evil, devil-possessed computerized machine and trade me a sweet, docile Singer Featherweight!

For those of you not familiar with the Featherweight, they were made in the mid-20th century. They are designed to be portable, fit neatly into a carrying case, and weigh only 11 pounds. They are small and quiet and have no bells and whistles whatsoever. They are especially popular among quilters.

It’s everything I could want! Mechanical. Old school. Sturdy. Easy to fix. Cute. Most important—it is NOT smarter than I, unlike some machines whose names must not be spoken!

You may think this is the dumbest decision you’ve ever heard and that I got the short end of the deal. But if you could have felt the joy and relief I felt when that computerized machine went down the driveway, maybe you’d understand.

So, today I’ll spend some time getting acquainted with my sweet new friend.

Have you ever wanted something so bad that, when you got it, all you could do is sit there and grin at it? 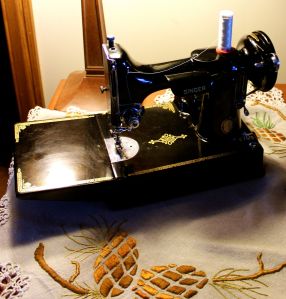