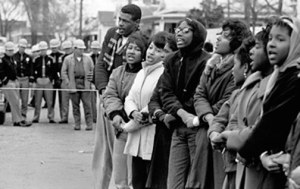 Deep in my heart, I do believe,

That we shall overcome, someday.

With the 50th anniversary of the March on Washington for Jobs and Freedom and Martin Luther King, Jr.’s, iconic speech, “I Have A Dream,” our thoughts return to the American civil rights movement.

So much can, and has, been said about this movement. And, because I can, I’m going to say more, not so much about the movement, in general, or the March on Washington, specifically, but on the song that became the anthem of the movement—“We Shall Overcome.”

As you know, I love things that bear the imprint of real people, and this includes music. No song better exemplifies the power of the human voice to bring about change in the world than the song, “We Shall Overcome.”

Above all else, the civil rights movement was a people’s movement. You can talk about the leaders—the Martin Luther Kings and the Ralph Abernathys and the rest. They were important but the most important folks in the struggle for civil rights were just that, the folk.

Many, many regular people, struggling in day-to-day life, but ready to take their chances and stand up for freedom.

One of the means by which these regular people communicated with each other, and with the world they were trying to change, was by singing. The so-called freedom songs, including “We Shall Overcome,” provided them with a way to express hopes and fears, to communicate about aspirations, and to present a unified and peaceful image of the community.

These songs were not presented by an expert singer to passive listeners; the freedom songs were, fundamentally, songs meant for singing, and everyone sang.

“We Shall Overcome,” a song we so associate with the civil rights movement, had been used, in varying forms for many years before.

In doing research on the song, I found many sources that said that the first version was written as “I’ll Overcome Someday,” by Reverend Charles Albert Tindley, in very early 1900s. But others, including Pete Seeger and Bernice Johnson Reagon, seem to believe that the song was much older and that Tindley adapted it and set it in print. Either way, the song was originally sung in churches with verses that said, “I’ll be all right” and “I’ll see the Lord someday.” (It should be noted that others have made claim on the song as well).

By 1945, the song was clearly being used politically, to bolster the nerves of singers as they sought change in their lives. Picketers sang the song during a strike by black tobacco workers in South Carolina; instead of “I will overcome,” the words by then had been changed to “we will overcome”—a significant alteration.

Soon thereafter, the song was brought to Highlander Folk School, in Tennessee, by union activists and another significant change was made to the wording. Singers no longer sang “we will overcome;” they asserted “we shall overcome.”

In 1957, Martin Luther King and Ralph Abernathy visited Highlander and heard the song. As the story goes, King later found himself humming the song and commented,  “That song really sticks with you, doesn’t it?”

In 1960, a leader at Highlander, Guy Carawan, began teaching “We Shall Overcome” to civil rights activists, who taught it to others at mass meetings. The SNCC Freedom Singers began singing the song as well and very soon the song was considered the anthem of the movement, the one song out of many that seemed to best express the thoughts and feelings of the activists.

The singing of “We Shall Overcome” became ritualized in many ways. Meetings began and ended with the song. Participants stood next to each other, with shoulders touching. They held hands, with right arm over the left, and swayed with the music. And everyone sang. This was not a performance but full-voiced participation.

By March 15, 1965, the civil rights movement was undoubtedly changing. Deadly racial violence flared up, as African-Americans were attacked by police while preparing to march to protest voting rights discrimination. After these attacks, President Johnson called for Voting Rights Act, to enforce the right to vote, and he used the words “we shall overcome” in his speech. As the tenor of black protest changed in the mid to late-60s, the singing voices went quiet.

But that was not the end of the story of “We Shall Overcome.” Unlike most of the other songs of the civil right movement, this one transcended that situation and has continued to reassure and galvanize singers around the world ever since.

The words and song have shown up in Indonesia, Beirut, East Berlin, South Africa, Egypt, Tiananmen Square, all through Latin America, and all over the United States after September 11, 2001. Versions abound on Facebook and YouTube. And, of course, the 50th anniversary of the March on Washington has brought the song to our attention again as well.

That’s the basic history of one song. The larger question, though, is how does one little song become so pervasive in the course of human events and, more importantly, why this song? Think of all the songs and all the candidates for immortality—why does one song get forgotten and another transcend its moment? If you care to stop back tomorrow, I’ll share my thoughts on that subject!

If you wonder about my credentials on this subject, let me reassure you. I spent my academic career studying the rhetoric of protest music. For much more on the topic see Kerran L. Sanger, “When the Spirit Says Sing!”: The Role of Freedom Songs in the Civil Rights Movement.  New York: Garland Publishing, 1996.